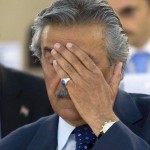 The U.N.’s top human rights body voted overwhelmingly Friday to condemn Syria over the slaughter of more than 100 civilians last week, but Damascus appeared impervious to the crescendo of global condemnation following a string of horrific massacres.

Syria’s most important ally and protector, Russia, voted against the measure by the U.N. Human Rights Council in Geneva. Russia has refused to support any move that could lead to foreign intervention in Syria, Moscow’s last significant ally in the Middle East.

As Russian diplomats in Geneva dismissed the resolution as “unbalanced” and voted against the text, Russian President Vladimir Putin promised to press the Syrian government for an end to the violence and insisted a political solution was still possible despite mounting frustration over the lack of diplomatic progress.

“It requires a certain professionalism and patience,” Putin said in Germany.

Russia, along with China, has twice used its veto power to shield Syria from U.N. sanctions.

Although Syria has come under deep international isolation since its forces launched a ferocious crackdown on dissent nearly 15 months ago, the May 25 massacre in a cluster of villages known as Houla has brought a new urgency in calls to the crisis.

“Syria is on the edge, it is on the edge of a catastrophic situation, if we can imagine one even worse than the current situation,” British Foreign Secretary William Hague said on the sidelines of a conference in Turkey.

A majority of countries in the 47-nation rights council supported a U.S.- and Arab-led resolution condemning the “outrageous use of force against the civilian population” in Houla.

“We believe that the acts committed by the Syrian regime may amount to crimes against humanity and other international crimes, and demonstrate a pattern of widespread and systematic attacks against civilian populations,” Hague said. Hague said evidence from U.N. observers and independent witnesses confirmed that security forces shelled Houla and that “government militia then went house to house slaughtering entire families without compassion or mercy.”

Only Russia, China and Cuba voted against the resolution, with Uganda and Ecuador abstaining. The Philippines was absent.

The resolution blamed “pro-regime elements” and government troops for the massacre. But Moscow echoed the Syrian government’s explanation for the killings, blaming rebels that the Kremlin says are trying to stir up a civil war.

Russian Foreign Ministry spokesman Alexander Lukashevich said the Houla massacre was a well-planned attempt to thwart a political solution to the crisis and “lead the situation in Syria to a new circle of gory violence.”

Moscow’s pro-Syria stance is motivated in part by its strategic and defense ties to Damascus, including weapons sales. Russia also rejects what it sees as a world order dominated by the U.S.

Speaking late Friday in Paris, Putin said Russia was not backing the Syrian regime, but trying to “reduce the violence to a minimum.”

“We are not for Bashar Assad or for his adversaries. We want to arrive at a situation where the violence is ended and the possibility of a civil war is completely avoided,” he said.

U.S. Secretary of State Hillary Rodham Clinton said she doesn’t quite buy the claim that Moscow is neutral in the Syrian conflict, saying in Oslo that Russia is viewed in the United Nations, in Damascus and around the world “as supporting the continuity of the Assad regime.”

“The continued supply of arms from Russia has strengthened the Assad regime,” and “that Russia has maintained this trade … has raised serious concerns,” she said.

Activists say as many as 13,000 people have died in Assad’s crackdown against the anti-government uprising, which began in March 2011 amid the Arab Spring. One year after the revolt began, the U.N. put the toll at 9,000, but many hundreds more have died since.

Despite the relentless violence, the Houla massacre stands out for its sheer brutality. Many of the dead were women and children who were gunned down in their homes.

Since then, two other mass killings were reported, both on Thursday. Thirteen bound corpses, many apparently shot execution-style, were found in the eastern province of Deir el-Zour, near the Iraqi border. Gunmen also killed 11 people on their way to work at a state-owned fertilizer factory in the central province of Homs, activists said.

There is no clear idea of who carried out the killings, although both sides traded blame.

U.N. deputy spokesman Eduardo del Buey said the U.N. has sent two teams to the area of the reported killings. “We cannot yet confirm the reports but teams are right now working on this,” del Buey said in New York.

While Putin urged patience in the crisis, Annan called for immediate action, saying Assad must take bold steps to end the violence.

“I know we are all impatient, we are all frustrated by the violence, by the killings,” Annan told reporters in Beirut. “We really want to see things move much faster.”

Annan is trying to salvage a peace plan that he initiated six weeks ago, which calls for a cease-fire by both sides. The plan has never really taken hold, but world leaders have pinned their hopes on it, since the U.S. and others are unwilling to get deeply involved in another Arab nation in turmoil.

On Friday, activists said Syrian security forces fired on thousands of protesters in different parts of the country as crowds poured into the streets to mark the Houla massacre.

An amateur video said to be taken in the posh Damascus neighborhood of Mazzeh showed scores of people inside a mosque chanting “Death is better than humiliation!” and accusing the Syrian army of being traitors.

Protests erupted in the capital Damascus, the southern province of Daraa, the northern regions of Idlib and Aleppo, Latakia on the coast and Hama and Homs in central Syria.

The Britain-based Syrian Observatory for Human Rights said the shooting at protesters occurred in Daraa, the suburbs of Damascus, and Aleppo, the country’s largest city.

Several people were reported killed, but there was no way to confirm the toll.

On Friday, the Red Cross said thousands of people who have been displaced because of the Houla massacre need urgent help.

“People left everything behind as they ran for their lives,” said Marianne Gasser, the head of the ICRC delegation in Syria. “Most of the displaced are women and children.”

Many are taking shelter in schools and other public buildings in a nearby village.

“There was not enough food, water and medicine for everyone, which put a great deal of pressure on the small village,” she said.

Del Buey, the U.N. deputy spokesman, said 210 detainees in Damascus and 13 in Daraa were released Thursday in the presence of U.N. military observers. He stressed that U.N. Secretary-General Ban Ki-moon and Annan “have said repeatedly we must see the release of all detainees being arbitrarily held and that clearly many more must be released.”

“This is a positive act in these challenging times,” Mood said in a statement.