US reaches out to Syria’s main ally, Russia 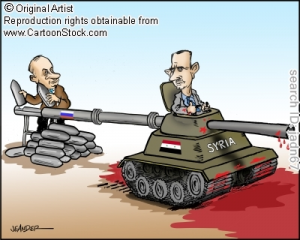 Washington reached out to Syria’s most important ally and protector Saturday, urging Russia to join a coordinated effort to resolve the deadly conflict as the violence spilled across the border into Lebanon, a senior State Department official said.

The international community has been frustrated by the failure of a U.N.-brokered peace plan to stop the bloodshed. Fears also have risen the violence could spread and provoke a regional conflagration.

“They both agreed that we have to work together,” said the official, who provided details of the private discussion on condition of anonymity. “Her message to him was that we have to start working together to help Syrians with a serious political transition strategy.”

Clinton said U.S. and Russian officials should engage diplomatically to come up with ideas in Moscow, Washington, New York and “wherever we need to,” according to the official.”

Russia has refused to support any move that could lead to foreign intervention in Syria, Moscow’s last significant ally in the Middle East. Russia, along with China, has twice used its veto power to shield Syria from U.N. sanctions.

Moscow’s pro-Syria stance is motivated in part by its strategic and defense ties to Damascus, including weapons sales. Russia also rejects what it sees as a world order dominated by the U.S.

The fighting in Lebanon’s northern city of Tripoli started shortly before midnight Friday and intensified Saturday.

Repeated outbreaks of violence in the city, the country’s second largest, are seen as spillover from the conflict in neighboring Syria and have raised fears of an escalation in sectarian tensions in Lebanon.

Lebanon and Syria share a complex web of political and sectarian ties and rivalries, which are easily enflamed. Clashes in Tripoli last month killed at least eight people.

The fighting in Lebanon pits Sunni Muslims who support Syrian rebels trying to oust President Bashar Assad against members of the Alawite sect, an offshoot of Shiite Islam of which Assad is a member.

Smoke billowed from several apartments near the city’s Syria street, the dividing line between the mainly Sunni Bab Tabbaneh neighborhood and the adjacent, Alawite-majority Jabal Mohsen. The area around Syria street was mostly empty except for gunmen roaming the streets.

“We are being targeted because we support the Syrian people,” one Sunni gunman said. “We are with you (Syrian people) and will not abandon you.”

Activists say as many as 13,000 people have died in Assad’s crackdown against the anti-government uprising, which began in March 2011 amid the Arab Spring. One year after the revolt began, the U.N. put the toll at 9,000, but hundreds more have died since.

In Syria, activists said government troops fired shells at Houla, a cluster of farming villages in the central province of Homs where the U.N. says at least 108 people — including 49 children under the age of 10 — were killed on May 25.

The opposition and the government have exchanged accusations over the massacre, each blaming the other.

Syria has long faced deepening international isolation, but the Houla massacre has brought a new urgency to calls to end the crisis.

In Qatar, the head of Syria’s largest exile opposition group said Saturday he would welcome Arab military action aimed at brining a halt to attacks by Assad’s regime against Syrian rebel forces and civilians.

Burhan Ghalioun, the leader of the Syrian National Council, made the comments before a meeting of Arab League foreign ministers, who discussed the bloodshed in Syria.

Gulf nations such as Saudi Arabia and Qatar have pledged funds to aid Syria’s rebels, but there is no direct evidence that the money is reaching anti-Assad forces or that the rebels are becoming better armed. The Arab League, however, does not appear ready to deploy its own troops.

After the meeting, the ministers issued a statement calling on the Arab world’s two main satellite operators, Saudi Arabia-hosted Arabsat and Egypt’s Nilesat, to suspend the broadcasting of Syria’s state-run and private television stations.

The move, which would block the regime’s ability to push its version of the uprising, is seen as another step by the Arab League to pressure Damascus, which was suspended from the 22-member bloc last year.

Syrian state TV quickly responded, saying the move is “part of the aggression against Syria and aims to silence the voice of its people.” It added that the decision aims to “conceal the facts of what is going on in Syria.”

With violence continuing despite nearly 300-strong U.N. observers on the ground in Syria, League chief Nabil Elaraby suggested that the monitors’ mission shift into a peacekeeping one.

“What is needed today is not only observing and investigating but supervising that the violence stops,” Elaraby told the meeting. “One of the alternatives could be amending the authorization regarding the observers so that they become a peacekeeping force.”

International envoy Kofi Annan, who has been trying to salvage his six-point peace plan, which includes a cease-fire that has not taken hold, warned Arab officials in Qatar that “the specter of all-out civil war, with a worrying sectarian dimension, grows by the day,” in Syria, and added that the crisis is spilling over to neighboring countries, an apparent reference to Lebanon.