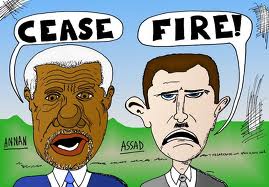 International envoy Kofi Annan on Saturday criticized President Bashar al-Assad for failing to comply with a peace plan to end the Syria conflict and said his forces were carrying out atrocities, arbitrary arrests and other abuses regardless of the world outcry against him.

At a meeting with members of the Arab League, Annan gave a bleak assessment of the situation in Syria 15 months on from the start of the anti-Assad uprising.

He conceded that efforts by the United Nations and the Arab League to make a ceasefire take hold had failed and said the prospect of an all-out war was growing by the day, risking drawing in the whole region.

Annan, a former Nobel Peace Prize laureate who is acting as Syria envoy for the United Nations and the Arab League, said he told Assad in “very direct and frank terms” when they met in Damascus last Tuesday that he must act to implement all points of the peace plan.

“He must make bold and visible steps immediately to radically change his military posture and honor his commitment to withdraw heavy weapons and cease all violence.

“What is important is not the words he uses but the action he takes – now.”

The uprising against Assad – who succeed his late father Hafez in 2000 to perpetuate the family dynasty – broke out last March and has grown from peaceful protests to armed insurgency.

The ferocity of the crackdown on the opposition by government forces has appalled the international community.

But Annan’s peace plan appears to be the only option on the table, even if it looks increasingly forlorn, as foreign governments are reluctant to intervene militarily and Russia is defending Assad on the diplomatic front.

The massacre last week of more than 100 men, women and children in eastern Houla region, believed by U.N. monitors to have been the work pro-Assad militias and soldiers, caused renewed outrage.

Annan said the Houla massacre was a terrible crime. “Worst of all, it is one of many atrocities to have taken place.

“Hundreds of thousands of Syrians are internally displaced. Meanwhile, arbitrary detentions continue, and alongside that, widespread allegations of human rights abuses of all kinds,” he said.

In Syria, opposition activists reported more violence on Saturday. Rebels killed six soldiers in the southern province of Deraa and at least eight others in clashes on the outskirts of the capital Damascus, the British-based Syrian Observatory for Human Rights said.

The Observatory also said two civilians were killed on Saturday, one during army raids in Damascus and one by gunfire in the city of Homs, the target of a brutal siege in February and March.

Since the conflict started, Assad’s forces have killed 7,500 people, according to a U.N. toll. The government, which portrays the unrest as the work of foreign-backed terrorists, says more than 2,600 soldiers or security agents have been killed.

The sheikh, whose country supports arming the mainly Sunni Muslim insurgents fighting to topple Assad, also called on the U.N. Security Council to put Annan’s plan under Chapter 7 of the U.N. charter, a measure that could authorize the use of force.

The increasingly sectarian nature of the conflict is fueling international concern that the conflict could crack open the Middle East’s religious and ethnic mosaic if unchecked.

The Assad clan is Alawite, an offshoot of Shi’ite Islam, and he is backed by Iran and many Shi’ites in neighboring Lebanon, including Hezbollah. Sunni-ruled Gulf Arab states, led by Saudi Arabia, have spearheaded international opposition to Assad.

“The specter of all-out civil war, with a worrying sectarian dimension, grows by the day,” Annan said. “I felt the concerns of Syria’s immediate neighbors very acutely in my consultations in recent days.”

Underlining that problem, Turkey said on Saturday that nearly 400 more Syrian refugees had crossed over the border to escape fighting in Syria’s Idlib province, raising the total to more than 24,500.

Also speaking at the Doha meeting, Burhan Ghalioun of the opposition Syrian National Council took a shot at Russia and said it must urge its ally Assad to quit power.

“With its support of the regime and for Assad remaining, Russia has become part of the problem rather than part of the solution,” he said.

Russia has blocked two U.N. Security Council resolutions condemning Assad and is Syria’s main arms supplier. On Friday it backed the government’s assertion that the Houla killings were the work of anti-government forces intent on undermining peace efforts.

Nearly 300 military observers are deployed in Syria to monitor the now-collapsed ceasefire.

“But we do not have what this was set up to achieve – an end to the appalling violence and abuses, and the launch of a political process for a transition that meets the legitimate aspirations of the Syrian people,” Annan said.