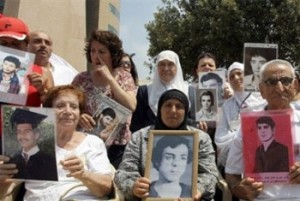 March 14 MP Nidal Tohme on Sunday expressed hope that the return of the Lebanese pilgrims, who were abducted near Syria’s Aleppo, would serve as an opportunity to address the issue of the hundreds of Lebanese nationals who went missing or kidnapped in Syria.

“We are waiting for [all] the efforts to bear fruits so that the kidnapped pilgrims would return home safe and sound. [We also] hope that this case would bring into focus the issue of all Lebanese people who were kidnapped or went missing in Syria,” Tohme said in a statement.

He also called on the government to fulfill its duties on the matter.

The current government is controlled by Hezbollah a close ally of the Syrian regime.

Last Tuesday, National News Agency (NNA) reported that 13 Lebanese Shiite pilgrims were kidnapped in Aleppo province as they were returning home by bus from pilgrimage in Iran.

There are conflicting reports about the whereabouts of the kidnapped Lebanese pilgrims.

Ya Libnan published several updates on the issue