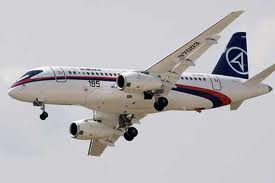 Russian intelligence agencies are investigating the possibility that the U.S. military may have brought down the Sukhoi Superjet that crashed in Indonesia, according to claims in a tabloid.

Citing sources in the GRU, Russia’s military intelligence agency, Komsomolskaya Pravda reported Thursday that interference from a U.S. air force base near Jakarta could have caused onboard equipment to go haywire, leading to the crash that killed 45 people on May 9.

“We know that they have special equipment that can cut communications between an aircraft and the ground or interfere with the parameters onboard. For example, the plane is flying at one altitude, but after interference from the ground onboard equipment shows another,” a GRU general told the paper.

The Sukhoi Superjet 100 disappeared from radar screens on May 9 shortly after the pilot asked for permission to reduce altitude 1,800 meters — a dangerous maneuver in such a mountainous area.

Its wreckage was later found on a spur of Mount Salak, a volcano that has been the site of numerous air crashes in the past.

The claims follow speculation that the crash, which killed 45 people, could have been an act of industrial sabotage.

“The main question is, why did the controller authorize the request to reduce altitude?” a source in Sukhoi asked Komsomolskaya Pravda.

“Maybe he didn’t see that the plane was heading straight at the mountain. On the other hand, we don’t rule out the possibility that this was deliberate industrial sabotage to drive our aircraft from the market,” a source at Sukhoi told the paper.

“When the plane flew toward the mountain it should have triggered an automatic mode that would have guided it away from the obstacle,” a pilot safety official at Domodedovo airport told the tabloid. “At Jakarta airport there is a U.S. Air Force base. And among our staff there is talk — couldn’t a signal have been sent from that base at a particular moment to put the equipment out of order?”

It is not the first time supposed American sabotage beams have been blamed for the loss of Russian equipment.

Last October a former official blamed “powerful American radars” in Alaska for the loss of the Fobos Grunt space probe.

The Sukhoi Superjet 100 is the first new civilian aircraft built in Russia since the Soviet collapse. The model that crashed was on a tour of Southeast Asia to drum up business for the aircraft.

Industry observers have warned that the program may never recover if the investigation finds technical failure was to blame for the crash.