US banks refuse to allow Syria to open an account 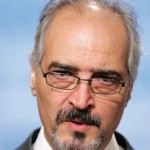 US banks are refusing to let Syria’s UN delegation open a bank account, its ambassador said Thursday blaming sanctions imposed over the conflict in his country.

Syria’s UN envoy Bashar Jaafari said the refusal by US banks was a “flagrant violation” of the UN charter.

Syria was among a group of countries that lost their bank accounts when a major US institution closed its branch at the United Nations last year.

With US banks applying tougher rules against all diplomatic missions because of fears over terrorist financing regulations, Syria’s UN mission was only able to find a new account in Washington.

“We are now facing enormous difficulties as we search for another bank,” the envoy added. “All banks contacted have refused to open an account for our delegation.” Syria cannot make payments to the United Nations nor receive money.

The envoy said this was “a result of the unjust and unilateral sanctions imposed on Syria. These sanctions imposed by some states who claim to respect the UN charter.” The United States, European Union and other regional groups have all imposed sanctions on Syria over its crackdown on opposition protests.

Syria is one of nine countries, including Cuba, that have been unable to open accounts for their UN missions, UN officials said however.

Maria Eugenia Casar, UN under secretary general controller, did not mention the Syrian case, but said she hoped the countries involved would be able to get accounts. She added however that it could take “months” to solve.