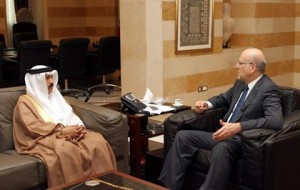 Following a meeting with Lebanon Prime Minister Najib Mikati at the Grand Serail, Saudi Ambassador to Lebanon Ali Awad Assiri said on Monday that his country would issue a travel advisory restricting travel for Saudi nationals to Lebanon if the situation in the country warranted it.

“If we feel that Saudis would be in danger in Lebanon we would take the right decision, but right now we are closely monitoring the situation” National News Agency quoted Assiri as saying .

“What’s important for the kingdom is civil peace in Lebanon,” the Saudi diplomat was also quoted as saying , stressing the “importance of closing ranks in dealing with the developments.”

NNA on the other hand quoted Mikati as saying that the”cabinet was keen about the security of Arab tourists the same way it is keen about the Lebanese people’s security.”

The Kuwaiti decision comes after gunbattles between pro- and anti-Syrian groups rocked Beirut overnight Monday, killing at least two people and wounding 18 others

The fighting erupted hours after reports that army troops had shot dead Sheikh Ahmad Abdel Wahid, a prominent anti-Syria Sunni cleric, near a checkpoint in north Lebanon on Sunday. Another cleric in the car was also killed.

Their killing followed a week of clashes between Sunnis hostile to the Syrian regime and Alawites who support Syrian President Bashar al-Assad that left 10 people dead in Lebanon’s northern capital Tripoli.

Tourism is the most important source of revenue for Lebanon. The action by the four Gulf states is a blow to the tourist industry which counts heavily on tourists from the Arabian Gulf countries. Several hotel and airline cancellations have already been made according to local reports.