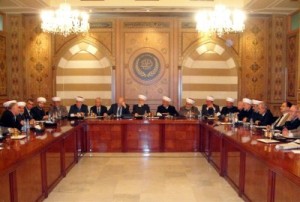 The Higher Islamic Council branded on Monday the murder of Sheikh Ahmed Abdel Wahid and his companion Sheikh Mohammed Merheb on Sunday as an assassination, according to a statement issued after a meeting at Dar al-Fatwa . The council demanded that the case be referred to the judicial council for further investigation.

“We demand that the case be referred to the judicial council.” The statement said

“The assassination was aimed at creating strife in Lebanon and officials should be held accountable for its consequences,” added the statement that was read by Mount Lebanon Mufti Mohammed Ali Jouzou.

The meeting was attended by Grand Mufti of the Republic Sheikh Mohammed Rashid Qobbani, Prime Minister Najib Mikati, and other Sunni officials.

“The political authority should assume complete responsibility towards the developments in Lebanon and the security forces should work under its authority to protect the country’s stability and rectify the flaws in the system that culminated in yesterday’s crime,” Jouzou said

The Dar al-Fatwa meeting also declared that Lebanon “is suffering from the consequences of the regional developments, especially those in Syria.”

“This was demonstrated by the letter sent to the U.N. by its ambassador Bashar al-Jaafari on Friday in which he accused charitable organizations managed by Salafist groups and the Mustaqbal Movement of harboring terrorists from al-Qaida and the Muslim Brotherhood,” Jouzou said.

The Dar al-Fatwa participants urged the Lebanese people to” exercise restraint during these tense times”.

Former PM Salim al-Hoss attended the emergency meeting but left early for health reason. Mikati abruptly left the meeting without making any statement to the reporters

Former Lebanese PM and current Future Movement bloc Fouad Siniora boycotted the meeting, which is traditionally attended by ex-premiers reportedly due to disagreement on the contents of the statement that will be issued at the end of the meeting. Siniora reportedly tried to impose 3 conditions on the conference which were rejected by the Grand Mufti.

1- The council to issue a clear statement that holds the authorities responsible after the mishaps in Tripoli and Akkar.

3- The council to outline a clear position against “attempts by internal parties to incite strife and internal conflict.”