US leadership needed to turn the tide against Bashar al-Assad

by yalibnan
554
By Joseph I. Lieberman More than nine months after President Obama declared that Bashar al-Assad must go, it is clear that neither diplomacy nor sanctions alone will dislodge the Syrian dictator
Share: 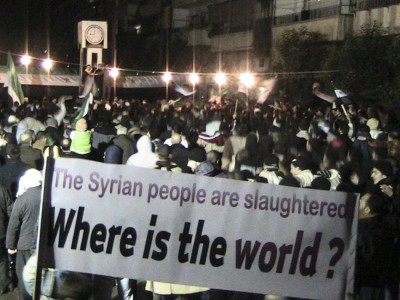 By Joseph I. Lieberman

More than nine months after President Obama declared that Bashar al-Assad must go, it is clear that neither diplomacy nor sanctions alone will dislodge the Syrian dictator. On the contrary, Assad’s campaign of killing will continue with no hope of a diplomatic settlement — dragging Syria into a protracted, bloody and increasingly sectarian civil war — until the balance of power inside the country shifts against him.

Unfortunately, the United States is not yet doing anything decisive to turn the military tide against Assad — nor will any other country or coalition of countries do enough, absent U.S. leadership.

These are the conclusions I have drawn after two visits in the past month to the Middle East, where I met with leaders of the opposition Syrian National Council and Free Syrian Army, Syrian refugees who recently fled to Turkey and Lebanon, courageous young Syrians involved in organizing the resistance in their country, and leaders of key countries in the region.

One message I consistently heard from both the Syrian opposition and U.S. partners is frustration about why the United States, which called for Assad’s ouster, has done so little to bring it about. Is it because Washington is preparing to make a deal with Iran, they asked, to end its nuclear weapons program in return for keeping Assad in power? Is it because of Israeli pressure to protect Assad, “the devil they know”?

These conspiracy theories are absolutely false — as U.S. and Israeli officials at the highest levels have made clear — but they show how deep the feeling runs among Syrians that they have been abandoned by the rest of the world.

What is happening in Syria is a humanitarian catastrophe, with at least 10,000 dead, more than 1 million people displaced and horrific human rights abuses perpetrated daily, including the widespread and deliberate use of rape and other sexual violence as weapons of war.

Events in Syria are also of strategic importance for the region. The fall of Assad would represent the greatest setback Iran has suffered in a ­quarter-century.

Conversely, the Syrian opposition is worried that the longer this conflict continues on its current path, the more Syrian society will balkanize and radicalize — opening the door for al-Qaeda and its affiliates to gain a foothold, and threatening to turn the country into a failed state that will destabilize the Middle East. This is an especially frightening scenario, given Syria’s large stockpile of chemical weapons.

That is why stopping Syria’s slide into civil war and anarchy is not just a mission of mercy but also an imperative for U.S. national security.

First, we must dramatically step up efforts to provide the Syrian opposition with the means to defend themselves against Assad, so that it becomes clear he cannot win on the battlefield and must seek a negotiated exit.

As in Libya, no U.S. troops should be put in Syria, nor should the United States act there alone. Our partners in the region have the funding, weapons and territory necessary for a full-scale effort to train, equip and sustain a more capable, professionalized and inclusive resistance against Assad — and they seem ready to do so.

What has been missing — and what both the Syrian opposition and our regional allies believe only the United States can provide — is leadership, organization and strategy.

This year the Obama administration committed to “non-lethal” support for the opposition. But non-lethal assistance alone is insufficient. A more comprehensive and coordinated effort is needed, together with our regional partners, to support the anti-Assad fighters with weapons, tactical intelligence and other lethal aid.

Some reports suggest such an effort is at least beginning to ramp up. If so, this would be a welcome development, and it deserves strong support from Congress.

A U.S.-coordinated train-and-equip mission would provide the leverage to better unify and broaden the opposition, incorporate all of the key stakeholders in Syrian society, and influence their conduct. Syrian fighters who want help must reject al-Qaeda and terrorism; refrain from human rights abuses and revenge killings; place themselves under civilian-led opposition command-and-control; and secure any weapons stockpiles that fall into their hands.

While strengthening and unifying the armed opposition on the ground should be our most urgent priority, it may not be sufficient to tip the military balance against Assad quickly enough. For that reason, the United States should begin discussions with our partners about a campaign of airstrikes to disrupt Assad’s command over his forces and to establish safe zones along Syria’s borders so the opposition can organize inside their country.

The way ahead will be difficult. There are hurdles to getting assistance to opposition fighters inside the country. Post-Assad Syria is certain to be rife with political and economic problems. Any intervention entails risks.

But it is clear that without greater intervention the current course of events will lead to greater danger: a humanitarian and strategic disaster that will directly implicate our moral values and national security interests. The way to avoid this outcome is for the military balance inside Syria to change, quickly — and once again that depends most of all on U.S. leadership.

Senator Lieberman is independent, represents Connecticut in the U.S. Senate.