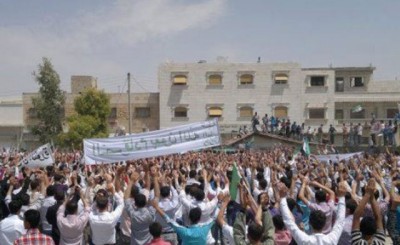 Protesters took the streets on Friday for the biggest demonstration in Syria’s Aleppo since the start of the uprising in March 2011.

“This is the largest protest in Aleppo since the beginning of the revolution. Thousands of protesters are demonstrating, despite the regime forces repression”, said Rami Abdel Rahmane from the Syrian Observatory for Human Rights.

He said the tens of thousands of protesters on the streets across the country, are “the largest gatherings since the ceasefire went into effect” on April 12.

Anti-regime activists had earlier called for Friday protests under the slogan, “Heroes of Aleppo University”, in solidarity with students who demonstrated despite brutal repression against the university.

Students in the northern city demonstrated on campus demanding the fall of Bashar al-Assad’s regime on Thursday as U.N. observers were visiting to oversee a ceasefire, largely ignored for a month, according to activists.

Meanwhile, Kofi Annan, the special U.N.-Arab League envoy to violence-torn Syria, plans to return to Damascus “soon” to further efforts to find a peaceful solution to the crisis, his spokesman said.

Ahmad Fawzi said no date had been set for Annan’s second trip to Syria since he was named special envoy.

A deputy is also planning a trip, he added, but owing to security risks he cannot reveal when.

“We said before that the joint special envoy is considering an invitation to visit Syria,” Fawzi told reporters in Geneva.

“I can say that yes, we can expect a visit soon.

“His deputy also plans to visit Syria but I cannot disclose his arrival time or his arrival date at this time.”

However, the commitment to Annan’s plan did not seem to hold as violence never ceased on the ground.

The town of Rastan, north of the city of Homs, came under heavy shelling by regime forces, which tried to break through the defensive lines set up by the armed opposition. The dozens of mortar shells landing on residential areas killed eight people on Friday morning, according to an initial tally by local activists.

In Damascus, an explosion accompanied by heavy gunfire was heard in the district of Tadamun, according to the Syrian Revolution Council. It was not immediately known if there were any victims.

Anti-regime activists have called for nationwide protests on Friday in support of students in Aleppo in solidarity with students in the northern city who demonstrated there the day before despite brutal repression in the presence of U.N. military observers.

Growing suspicions of an al-Qaeda presence in Syria, meanwhile, further complicated matters for the fragmented opposition, which has repeatedly refuted any links to the Islamist organisation.

“This is something we have never seen before. We have never placed our military observers in a situation like this,” he said.

The U.N. Supervision Mission in Syria (UNSMIS) is closing on its full strength of 300 monitors. But Western countries are still predicting UNSMIS will not be renewed after its first 90 day mandate on July 20.

“There is a risk that at any moment military observers will be killed or injured,” said Britain’s U.N. envoy Mark Lyall Grant. “There have been some close shaves, so it is a situation we are keeping under close review.”

Artillery attacks on towns have reduced since the mission deployed, but the death toll is still high.

“It is the same strategy with a different tactic,” said one senior U.N. diplomat. “Instead of killing 100 they kill 60 and arrest 500.” Rights groups and other sources say there has been an explosion in targeted killings. The U.N. says up to 10,000 people have been killed in the past 15 months.

Assad has shown willingness to start political talks. And the opposition is still too divided for negotiations, diplomats said.

No one has a Plan B to propose however to the peace plan of U.N.-Arab League envoy Kofi Annan.

“I know lots of questions have been asked about what happens if the plan fails,” Annan said last week. “I am waiting for some suggestions as to what else we do. If there are better ideas I will be the first to jump onto it.”

“There is no credible alternative,” according to Germany’s U.N. ambassador Peter Wittig.

So the international community is sticking with Annan’s plan though most diplomats and observers say the a new Security Council battle over Syria is likely when the 90 day mandate ends.

Russia, Assad’s main international ally, may demand an extension of UNSMIS, along with fellow permanent member China, and India, Pakistan and South Africa.

The United States, Britain and France, the three Western permanent members, are not yet sure how to call time on the mission. Even US officials who most opposed UNSMIS are not yet calling Annan’s plan a failure.

Richard Gowan, a specialist at the Center on International Cooperation at New York University, has predicted that the Annan mission will be a “heroic failure.”

But he said “it’s important that the Western powers allow Annan to declare failure himself, or Russia will attack them for killing his mission.

“Annan may feel he cannot give up, as this might be the final act in his long career as an international official. But if he feels that his plan is now dead, he should realize that there is greater honor in declaring this than carrying on hopelessly,” Gowan said.

The debate on Syria is expected to be taken up at the NATO summit in Chicago on Sunday and Monday.

“If Annan does not call off the attempt then it could put us in confrontation with him,” said a senior Western diplomat. “Then Russia will block sanctions and everything.”

“If Annan recommends sanctions then Russia and China could go on the attack against him,” added another Security Council envoy.

The Syrian opposition and some Middle East countries would like a military solution. “But for the moment no country in the West has signed up for this,” said the envoy.

“We may well conclude down the line that (the plan) doesn’t work and a different tack has to be taken. And that would be a very sad day and a tough day for the region,” Annan said.