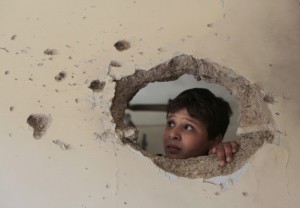 Woe, again, is Lebanon. Pity the tiny nation that seems condemned to be dragged into virtually every one of the region’s conflagrations. Such is the fate of a perennially divided country.

Right from the start of the uprising against Syria’s Bashar al-Assad, it was inevitable that similar tensions would echo inside the borders of Syria’s smaller, weaker, more subdivided neighbour (and one-time political subordinate.)

The violence had already “spilled over” on a few occasions, but the latest episode this past week, may be the worst yet.

For four days now, gunmen from opposing factions openly traded bullets and rocket-propelled grenades (even mortars, according to the local press), on the streets of the northern Lebanese city of Tripoli, killing at least seven.

Shops and schools were shuttered, and frightened residents either cowered in their homes, or fled for safer ground as the usual round of condemnations came from around the world, warning of the consequences of escalation.

The clashes pitted Sunni Muslim supporters of the Syrian uprising, against Lebanese members of the Alawite sect, an offshoot of Shia Islam and the same sect to which Syrian President Assad belongs.

It’s not the first time the predominantly Sunni residents of Bab al Tabbaneh and their Alawite counterparts in the Jabal Mohsen neighbourhood have collided. They have been fighting for decades, and the Syrian conflict presents just another opportunity to settle old scores.

Today, their battle is a tiny microcosm of the sectarian undertones to the conflict next door and, though disturbing, the only real surprise is that such clashes haven’t been more widespread in Lebanon given that the entire country — like the region — is already sharply divided and organized around support, or disdain, for Syria.

In Lebanon’s case, these divisions over Syria came to the fore after the murder of former prime minister Rafik Hariri in 2005.

One camp blamed the murder on Damascus, Lebanon’s long-time political master, while the other camp, led by the Shia organization Hezbollah, defended the Assad regime (a staunch backer of the armed, militant group.)

In the process, two new political groupings were born: one known as March 14 (allied to Sunni Arab nations, close to Western countries and opposed to Syria); and the other, March 8 (allied to Shia Muslim Iran and Allawite-led Syria).

A fractured nation that has long been the arena for Middle East tensions to play out, Lebanon is now also reflecting the growing antagonism between Sunni and Shia Muslims throughout the region.

That animosity has been smouldering for centuries, but became inflamed during the upheaval and civil war in Iraq, and now again because of what’s going on in Syria.

It is essentially a power struggle for influence and supremacy chiefly between Sunni Saudi Arabia and Shia Iran, and since 2005 it has led to several deadly clashes in Lebanon, many of which I witnessed while I was living there.

In those days, Lebanon was the favourite proxy battleground for the region’s sectarian rivalries. Today, with Syria’s own divisions on stark display, it is in danger of assuming these honours.

In Syria, the majority of people are Sunni Muslim, but the ruling Assad regime is largely Alawite, and each group has its regional backers.

The situation was already serious enough — with a regime killing thousands of its own citizens simply for protesting, in a bid to hold on to power. But when you add the region’s sectarian antagonisms to the mix, you have the real makings of an even more serious civil war.

Lebanon, once again, provides the best cautionary tale for how these divisions can be exploited. In the 1970s and ’80s, Lebanese fought a devastating civil war that was fuelled by competing regional players.

Many Lebanese believe that is why it took 15 years for the conflict to end, because it was stoked by other nations willing to exploit the many rivalries, and provide the weapons and ammunition to keep the fighting going.

Syria finds itself at that same crossroads now. Saudi Arabia and Qatar and other Sunni Arabs are bent on toppling the Alawite Assad regime and have been providing weapons to the rebels, according to numerous reports.

Meanwhile, Iran (and increasingly Iraq) are standing by Assad. Iran has apparently already been providing at least logistical advice, if not more, to enable the regime’s crackdown.

So if you’re looking for evidence that Syria’s conflict is spilling over, you’re late to the game.

It’s been spilling over from the start — into Saudi Arabia, Iran, Qatar, even the Palestinian Territories, and indeed, into Lebanon, where people have been holding their collective breath since the violence started, disturbingly aware how their own internal divisions could make way for the violence to descend once again.

Given that similar rifts exist in Syria, it’s easy to see how all this can mean a long, full-fledged civil war there too.

“Pity the nation,” wrote the Lebanese-American poet Khalil Gibran, “divided into fragments, each fragment deeming itself a nation.”

Lebanese know exactly what the poet was talking about. Syrians are well on their way to finding out. Pity the nation indeed.

Photo : Tripoli. A Lebanese boy looks thru a hole made by shrapnel. Islamist supporter of the Syrian opposition, Shadi Mawlawi, 25, was arrested and accused of belonging to a “terrorist organization.” Mawlawi’s controversial arrest Saturday sparked three-day clashes in Tripoli, north Lebanon’s capital , between opponents and supporters of Syrian President Bashar Assad, leaving at least seven dead and 100 wounded.