U.S. is in a “holding pattern ” on Syria, report 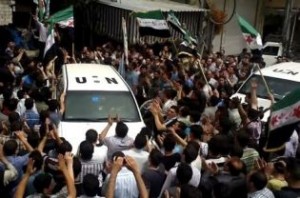 Fifteen months into the crisis in Syria, and the Obama administration is, as one U.S. official describes it, in “a holding pattern,” waiting for Russia to abandon its support for President Bashar al-Assad, waiting for sanctions to topple the economy and waiting for an organized Syrian opposition to present a coherent vision for a post-Assad Syria.

As the U.S. waits for what many believe is the inevitable failure of a United Nations-backed plan, American officials say they would rather U.N.-Arab League special envoy Kofi Annan to pronounce his diplomatic efforts a failure himself.

Senior officials say the international monitors provided for in the current agreement with the Syrian government, however small in number, offer a small buffer against Assad’s forces. Additionally, the U.S. and its allies on the U.N. Security Council want Russia to come to its own conclusion that Assad is not living up to his end of the agreement in ceasing the violence, and the plan is a failure. The concern is should the U.S. push for the next step, it would further alienate Moscow, which is skeptical about efforts to push out Syria’s president. How the plan fails is as important as when it does, Western diplomats said this week.

“You have the politics part of this plan, and you have what is really happening on the ground,” one U.S. official said. “We are going to be in a bit of a holding pattern for a while, debating on whether this has succeeded or failed, and whether it was designed to fail.”

But the U.S. is looking for ways it can further aid the opposition. U.S. officials and congressional sources say the Obama administration has realized that nonlethal communication, currently the bulk of U.S. support for the opposition, is not enough. In recent weeks, the U.S. has broadened its outreach to include Syria’s rebel groups, including the Free Syrian Army.

“These guys need space, training and greater capabilities,” one congressional source said. “What is that, where would it be done, who would it be for? Those are the questions the administration is trying to answer, and they need to be moving a lot faster.”

So far, representatives of the rebel groups say the weapons are not coming in any significant numbers.

“The problem is we want weapons but have received nothing so far,” said Free Syrian Army Capt. Riad Ahmed, currently in Istanbbul.

Sen. John McCain R-Arizona, one of the administration’s harshest critics on Syria policy who recently returned from a trip to the Turkish border with Syria, has openly called for arming the opposition and supporting havens for opposition members.

“What they need, first of all, is weapons to defend themselves,” he told CNN’s Anderson Cooper. “Then we need to talk with our allies about a sanctuary, a place where the government can organize, where we can train and equip these forces so that we can have a fair fight.”

The State Department has also stepped up its efforts to unite Syria’s fractured political opposition. Last week, the State Department invited leaders of the Kurdish National Council, from the relatively quiet eastern part of Syria, to Washington. In meetings with U.S. Ambassador to Syria Robert Ford other senior US officials, sources said the possibility was raised of opening another front against al-Assad’s forces to force him to divert resources from the western part of the country.

Sanctions have left Syria’s main revenue sources, tourism and oil exports, “almost completely dried up,” according to David Cohen, the undersecretary for terrorism and financial intelligence. “They’re not earning, and on the expenditure side, they’re spending money to try and keep inflation down by subsidizing food and fuel, and they’re spending a lot of money, frankly, pursuing the violence against their own people,” he said last week at an event in Washington. “The combined effect of this is that the economic situation in Syria today is quite perilous.”

In the coming weeks, a working group made up of representatives from various countries will meet in Washington to consider how to increase financial pressure on Damascus, Cohen said.

Earlier this year, the administration concluded that the Syrian National Council, the primary opposition group dealing with the international community, will not be running the country after al-Assad falls. Since then, Ambassador Ford, who has combed the globe to meet with Syrians from all walks of life, has tried to identify Syrians inside the country whom the U.S. can do business with. Members of the country’s various revolutionary councils – the grassroots movements that are coordinating on the ground with the armed opposition – are viewed as more organized and potentially able to help Syria through a transition period.

There is still little coordination between Syrians on the ground and the Syrian National Council, which is still the international face of the opposition. In the coming days, Ford is hoping to convene a meeting of a diverse group of Syrians, including some from inside the country, with the goal of creating a more cohesive opposition that can inspire more confidence from the international community.

“It is preposterous that we are only at this point after 15 months,” another U.S. official lamented.

Once the opposition is sufficiently united, the ball will be in the U.S. court to actively support it. Until now, the Obama administration has been loath to support militarization of the conflict in Syria, fearing it would spark the kind of civil war that sprang out of the U.S.-led invasion of Iraq.

Yet last week’s bombing of a Syrian intelligence facility, presumed to be the work of al Qaeda in Iraq, proves those fears have already been realized. Some U.S. officials and diplomats worry how long members of the opposition will be willing to fight a losing battle with the regime without sufficient international support until they turn to al Qaeda, which is more than willing to help them wage jihad.

“By not doing anything,” warns Andrew Tabler, a Syria expert with the Washington Institute for Near East Policy, “we are contributing to the fact that this is tipping from a civil resistance into a civil insurgency and into a civil war.”

The international community is looking toward the United States for the elusive plan B. But as the presidential election in the United States approaches, diplomats in the region voice frustration about what they perceive as a lack of political will from the Obama administration to orchestrate the next move in Syria.

“In order to say the Annan plan doesn’t have any hope, you have to have a plan to deploy immediately,” one senior Western diplomat said. “If you say it’s dead, people are going to say, ‘What is next?’ There is nothing.”

Nowhere is that sentiment felt more strongly than in Turkey. While the Obama administration has been actively considering support for havens inside Syria, Washington is looking to Ankara to lead the way. Turkish officials, however, say they are looking for the U.S. to provide the leadership first, which they say starts with Washington working more actively to secure Russian support for a U.N. Security Council resolution under Chapter 7, which would provide a legal basis for any military intervention.

Turkish officials say they want international legitimacy for any further action, which only such a U.N. mandate can provide.

“We are prepared to do everything possible in our power to help the Syrian people,” one senior Turkish official said. “But if you are waiting for us to come and say we will do it, we won’t go it alone.”

The U.S. also wants Turkey to make a political decision to allow training and equipping of Syrian opposition on its soil. Ankara has told the U.S. it is prepared to allow weapons to flow across its borders and more actively help the internal Syrian opposition, but only if Washington, too, exercises leadership.

“The Turks are prepared to deliver if the U.S. is with them,” one U.S. official said. “They don’t want to do something and be left holding the bag. They want to be assured of success, and that means American leadership.”

Syria is likely to be a topic of discussion at this weekend’s NATO summit in Chicago. Although the alliance has repeatedly said it has no plans to wade into the Syrian conflict, Turkey has suggested it could invoke Article IV of the NATO Charter, which allows NATO to begin consultations on threats to Turkey, which would pave the way for consultations on how Syria may pose a threat to Turkish security.