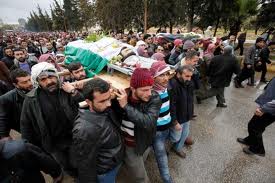 At least 20 people were killed and dozens wounded on Tuesday when Syrian regime forces opened fire on a funeral procession in Idlib province during a visit by UN monitors, a watchdog said.

“The Syrian regime committed a massacre Tuesday during a visit by UN monitors to Khan Sheikhun,” in the northwestern province,” the Syrian Observatory for Human Rights said.

The Britain-based group called for an international probe into the killings that took place during the funeral of a man killed the day before.