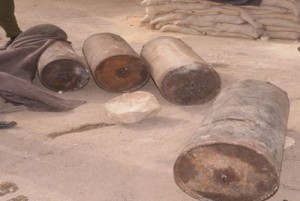 Syrian forces foiled an attempted suicide car bombing with 1,200 kg (2,645 pounds) of explosives in the northern city of Aleppo on Friday, state television said, a day after two bombs in the capital Damascus killed at least 55 people.

The would-be bomber was killed in the al Shaar district of Syria’s largest city which, like Damascus, has seen increasing street protests against President Bashar al-Assad and rising levels of bloodshed after months of relative calm.

Twin bombings in southern Damascus killed 55 people and wounded more than 300 on Thursday, the deadliest attacks since the uprising against Assad erupted 14 months ago, inspired by revolts against autocratic rulers elsewhere in the Arab world.

The blasts further undermined a tattered ceasefire agreement repeatedly violated by the army and rebels since it was brokered by international mediator Kofi Annan four weeks ago. The deal has been overseen by nearly 150 unarmed U.N. observers in Syria.

Syria said the attacks showed that it faced foreign-backed terrorism – an argument it made from the start of peaceful protests against Assad in March last year – while the opposition blamed authorities for the blasts. 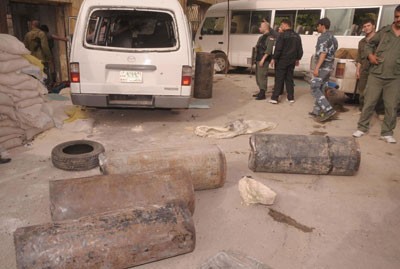 Syria’s Ikhbariya television showed U.N. monitors inspecting a white mini-van in Aleppo on Friday which an army officer told them had contained enough explosive to kill 500 people. The bloodied body of the van driver lay crumpled in the front seat, behind a windscreen riddled with bullet holes.

The officer told the U.N. observers the driver, who he said was not Syrian, was shot before he could detonate the bombs.

There was no claim of responsibility for the Damascus bombings. Syrian authorities blamed foreign-backed terrorists. Opposition activists denied any involvement. Some analysts have speculated that recent bombings could be the work of al Qaeda-linked Islamists with skills honed by years of activity in Iraq.

Video footage that activists said was filmed in Aleppo on Friday showed hundreds of demonstrators marching and chanting “peaceful, peaceful”, before scattering as the sound of gunfire rang out.

The Syrian Observatory for Human Rights said one person was killed at the Aleppo protests and another nine civilians were killed across the country on Friday.

The opposition Syrian National Council said on Friday Annan’s peace plan had been “dead from the start” because state authorities had not respected the ceasefire, and called for foreign intervention to protect civilians.

“The steps should include the creation of a buffer zone, secured humanitarian aid corridors, a no-fly zone and measures to protect people from violence,” the SNC said in statement.

The bombings in Damascus, it said, had been just one of a series of attempts by Assad’s security forces aimed at scaring off Annan’s international observers.

The observer mission aims to deploy 300 monitors across Syria by the end of May under Annan’s plan, which seeks to end more than a year of bloodshed by disengaging opposing armed forces, launching political dialogue and ensuring free access to Syria for humanitarian aid and journalists.

Annan’s April 12 ceasefire initially helped calm the violence, but the Syrian Observatory for Human Rights, estimates that 900 people have been killed since then.

Despite scepticism over its prospects of success, world powers are reluctant to write off the monitoring mission.

“I don’t think it’s time yet to say that the mission and the Annan initiative has failed,” Washington’s U.N. ambassador, Susan Rice, said on Thursday.

“Although we’ve been sceptical of the Syrian government’s readiness and willingness to implement its commitments, what Annan is trying to do makes eminent sense and we support it.”

“Some of our foreign partners are doing practical things so that the situation in Syria explodes in literal and figurative sense,” state-run RIA quoted Foreign Minister Sergei Lavrov as saying in Beijing on Thursday.

Russia has been a strategic ally and major arms supplier to Syria during its four decades under Assad family rule.

Photo: Syrian state owned SANA published this picture of 4 bombs that reportedly total 1200 kg ( 2645 lbs) on its website. SANA reported that the bombs(which look like car engine exhaust silencers) were used to booby trap a minibus.