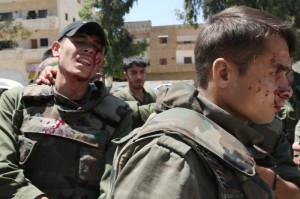 Syrian troops were apparently escorting a team of observers in Daraa, in Syria’s troubled south, when an explosive device planted underground detonated as it passed by.

The head of the UN mission, Norwegian Major General Robert Mood, was in the convoy along with 11 other UN observers and a spokesman.

They all escaped unharmed, but at least three Syrian soldiers were hurt.

Major General Wood said the blast was a “a graphic example of violence that the Syrian people do not need.”

The opposition Syrian National Council accused the regime of being behind the Daraa blast.

“We believe the regime is using these tactics to try to push the observers out amid popular demands to increase their numbers,” said SNC executive committee member Samir Nashar.

The attack with rocket-propelled grenades on a bus carrying the fighters through the suburb of Irbin prompted the army to seal off the area and respond with shelling, activist Mohammad Saeed said.

“We believe the regime is using these tactics to try to push the observers out amid popular demands to increase their numbers” .

The sustained violence, nearly four weeks after a ceasefire deal was brokered by international mediator Kofi Annan, has led to warnings this week from the Red Cross, Arab League and Mr Annan himself that Syria is slipping into civil war.

The team of UN monitors is expected to grow to 300 in coming weeks.