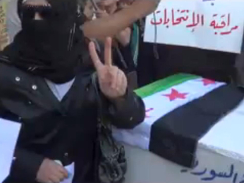 Anti-regime activists were quick to spoof Syria’s parliamentary elections Monday with a flurry of amateur, online videos lampooning a vote they say aims to put a shiny gloss on the authoritarian rule of President Bashar Assad and cover up its fierce crackdown on protesters.

In one video, “voters” line up in at a staged polling station and first in line is a man in a white funeral shroud, killed by regime forces. “God have mercy on your soul,” says an actor playing a reporter before asking him what he thinks of the voting.

“The elections are free and fair!” the dead man declares in the video, filmed in the northern village of Kafr Sijneh. Next in line behind him is a wounded man, covered in white bandages with huge blood spots on his arms and head.

Since the anti-Assad uprising started in March, 2011, amateur videographers have played a key role in telling their story to the world outside of one of the Middle East’s most brutal police states, uploading daily hundreds of videos of protests, destroyed homes, regime forces and the often bloody bodies of those killed by them. Alongside the serious videos, there has been a steady stream of spoofs showing an often dark humor about the crisis.

Assad’s regime has touted Monday’s voting as part of a set of major reforms to open the political system. For the first time, parties other than the ruling Baath Party are allowed to run in the election for the 250-member parliament.

Syrian state TV and other pro-government channels covering the elections broadcast footage of lines of voters dropping white ballots in plastic boxes across the country. Those interviewed talked about how much they loved Syria and how the elections were a true exercise in democracy.

But opponents of the regime have largely boycotted the vote, saying it is a sham and that the government is not serious about change.

Nationwide violence was relatively low Monday, and activist videographers used the day to skewer the vote.

In one video from the village of Biftamoun in north Syria, a line of boys approaches a wooden crate marked “parliamentary elections” to cast their votes. One brings two handfuls of spent bullet casings, presumably rounds fired at protesters, and dumps them in the box.

“Turnout was 99 percent,” a voice off camera says as a boy drags forward a large brown goat that bleats at the camera. “Even the animals voted.” Another boy carries a large gray rabbit by the ears.

Another video shows boys coming one by one to drop old flip-flops in a large metal tin.

“You’re voting for the president?” asks a man standing nearby. The boy nods and the man hands him some cash.

It was unclear how extensive voting was throughout the country Monday, especially in opposition area and places that have been hard hit by regime forces or witnessed clashes between troops and rebels. Activists said many towns observed general strikes and posted videos of blocks along main streets with all shops closed.

In recent weeks, the capital Damascus has been festooned with election posters advertising candidates. Activists responded with photos of their own, putting up posters nominating the “martyrs” killed by security forces to the parliament.

Another video from the northern village of Has imagines how the elections’ victors will be decided. A large man in sunglasses sits behind a large desk, threateningly wielding a length of green hose. He summons a number of men and rewards each one with a seat in parliament for his efforts in building support for the regime.

“You made the truth false and the false true!” he tells one of them.