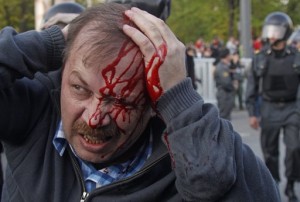 Vladimir Putin took the oath as Russia’s president on Monday with a ringing appeal for unity at the start of a six-year term in which he faces growing dissent, economic problems and bitter political rivalries.

Parliament is expected to approve to his ally Dmitry Medvedev, 46, as prime minister on Tuesday, completing a job swap that has left many Russians feeling disenfranchised two decades after the Soviet Union collapsed.

Outside the Kremlin’s high red walls, riot police prevented protests by rounding up more than 300 people, including men and women in cafes who wore white ribbons symbolizing opposition to Putin, a day after detaining more than 400 during clashes.

But in the Kremlin, 2,000 dignitaries applauded Putin’s every step down the red carpet into a vast hall with gilded columns, the throne room of tsars, where he was sworn in with his right hand resting on the red-bound Russian constitution.

“We will achieve our goals if we are a single, united people, if we hold our fatherland dear, strengthen Russian democracy, constitutional rights and freedoms,” Putin said in a five-minute speech after taking the oath for the third time.

“I will do all I can to justify the faith of millions of our citizens. I consider it to be the meaning of my whole life and my obligation to serve my fatherland and our people.”

The Kremlin’s bells pealed, and the national anthem blared at the end of a ceremony which was followed by the head of the Russian Orthodox Church blessing Putin and the president taking charge of the nuclear suitcase.

Although he has remained Russia’s dominant leader for the past four years as prime minister, Putin, 59, has now taken back the formal reins of power he ceded to Medvedev in 2008 after eight years as president.

Putin is returning with his authority weakened by months of protests that have polarized Russia and left the former KGB spy facing a battle to reassert himself or risk being sidelined by the business and political elites whose backing is vital.

“We want to, and we will, live in a democratic country,” Putin declared, evoking patriotic images of Russia as a great nation and urging people to show a sense of responsibility and national pride to make the country stronger.

Putin made no mention of the protest movement in his speech and no promises of political reform in a series of decrees he signed after the ceremony, most of them focused on economic goals and efforts to improve living standards.

Despite his pledge, riot police, nervous after battling protesters at an anti-Putin rally on Sunday, cracked down on the slightest sign of dissent on the streets of central Moscow, many of which were almost empty.

At least 22 protesters were led away when a crowd of more than 100 started shouting “Russia without Putin” near two luxury hotels 500 m (yards) from the Kremlin.

Dozens of others were detained by police on a boulevard near the route of Putin’s motorcade to the ceremony, including some who had been sitting outside a French bistro wearing the white ribbon of protest on their jackets and coats.

A Reuters correspondent saw tables and chairs being overturned as the people were hauled away.

Police moved in quickly several times through the day and evening as activists sought to gather in various locations for protests, pressing against crowds and detaining people.

Moscow police said 300 had been detained, including some people who were released and then detained when attempting to protest again. In Putin’s hometown of St Petersburg, police detained a few protesters in a small crowd on Palace Square.

Alexei Navalny and Sergei Udaltsov, two opposition leaders who were detained at Sunday’s protest and released on Monday after courts fined them 1,000 roubles ($33) each, gathered at a small central Moscow park near the presidential administration offices after dark with a crowd about 200 and vowed to remain.

Although the protests, sparked by allegations of electoral fraud, had lost momentum before Sunday’s rally, they have given birth to a civil society that will press on with attempts to undermine Putin’s authority by contesting local elections.

Many of the protesters are angry that Putin is extending his 12-year domination of Russia and fear he will stifle political and economic reform in his third term as president.

He is under pressure to show he can adapt to the new political landscape. Few think he has changed much, if at all.

He has eased up on the choreographed macho antics that long burnished his image in Russia, such as riding horseback bare-chested and shooting a tiger with a tranquilizer gun.

Harder to shake off will be his habit of seeking total control, as political rivals begin to gain status and a rising middle class demands more political freedom.

He has to quell rivalries between liberals and conservatives battling for positions in the new cabinet under Medvedev, who is swapping jobs with Putin. The outcome of the struggle could help determine how far reforms go to improve the investment climate.

The $1.9 trillion economy is in better shape than that of most European countries, but is vulnerable to any drop in the price of oil, the main export commodity. The budget is under pressure from Putin’s lavish pre-election spending promises.

He called for the creation of a “new economy” in the speech and reiterated those goals in economic decrees signed on Monday, but critics say he has had plenty of time to tackle the persistent problems in his years in power.

He set out aims on a range of issues in other decrees, from higher wages for teachers and other state workers to better weapons for the military and a decrease in Russia’s death rate.

As in the past, he is likely to use tough anti-Western rhetoric on foreign policy to drum up support if times get tough in Russia. But he never yielded his strong influence over foreign policy as premier, so a major policy shift is unlikely.

Putin struck familiar chords in a decree on foreign policy, emphasizing opposition to foreign interference in sovereign states and saying Moscow wants “strategic” ties with the United States but will not tolerate meddling.