Whom will Chavez name as successor ? 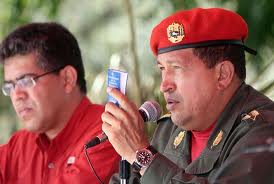 President Hugo Chavez’s repeated trips to Cuba for cancer treatment and the government’s silence about his health are fueling rumors that he will name a successor to run in October presidential elections.

So far, the government has fiercely maintained that there is no alternative to Chavez, who still leads in the polls. But several names have begun to circulate among observers to take the helm should Chavez delegate his powers.

Any departure of Chavez from the national stage would have profound consequences in Venezuela, where he has governed since 1999. It would also have a huge impact across Latin America, especially in leftist ally nations which have been showered with his country’s oil wealth.

Jaua will soon be named president of the Council of State, an advisory body whose creation this week is seen by some analysts as the first step toward a potential political transition since Chavez experienced a relapse of the cancer first detected in June 2011.

“With the lack of information, all scenarios are possible, including Chavez’s absence and the naming of a successor” for the October 7 vote, said Datanalisis polling firm president Luis Vicente Leon.

Chavez returned to Cuba on Tuesday for what he called the “home stretch” of his radiation treatment, without providing more details. His previous stay, which was supposed to have been his last, stretched out for 11 days.

The exact nature of the cancer has never been disclosed. The 57-year-old underwent an operation in Havana on February 26 to remove a second cancerous tumor in his pelvic area, where a baseball-sized growth was extracted a year ago.

Usually all over the Venezuelan media, Chavez now rarely appears in public and has been reduced to sending out tweets during his long absences in Cuba.

Chavez is running for reelection as a “revolutionary socialist” against Henrique Capriles, the youthful Miranda state governor and center-left candidate for the united opposition.

Capriles scoffed at the pervasive uncertainty surrounding Chavez’s political future. “A country cannot be ruled via Twitter, the Internet or by telephone,” he said Friday.

Even in the president’s own ranks, tensions and divisions are growing. But so long as Chavez is alive, “these confrontations will be relegated to the back stage, because the president of the United Socialist Party can still destroy” his rivals, Leon said.

For now, the firebrand leftist leader’s health is overshadowing the run-up to the presidential campaign.

Yet “his absence is not yet having an effect on how most Venezuelans intend to vote,” analyst John Magdaleno said.

But Leon warned that the government’s silence on Chavez’s wellbeing and ability to run the country could be hiding a political maneuver.

“The president could be trying to prepare a triumphant return and then, the bigger the speculation about his health, the less he will need to make new proposals” upon his return, Leon added.

The electoral campaign officially gets under way on July 1, but the law allows for replacing a candidate unable to run at any time, constitutional lawyer Enrique Sanchez Falcon noted.

The most prominent face of the left in Latin America, Chavez has rallied a group of like-minded leaders as a counterweight to the United States.

Photo: President Hugo Chavez with his Vice President Elias Jaua in a file photo. Jaua ( Hawa) who is of Lebanese origin is one of  3 top  potential  candidates   that are being considered to replace Chavez  in October elections