Get to know Hollande, the new French president 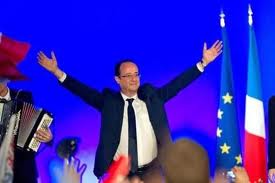 He likes to call himself “Mr. Normal,” which is a decided change from the many other epithets, like “Marshmallow man,” that have been tossed his way over the years.

But Socialist leader Francois Hollande, who is set to become the next president of France after defeating Nicolas Sarkozy on Sunday, can also be seen as the amiable political tortoise who overtook the hyperactive hare.

Known throughout his 30-year political career mainly as jovial backroomer and party fixer, Hollande’s highest profile job, until now, was the often self-deprecatory, executive secretary of the Socialist party, while other, more glamorous folk sought its political leadership — and almost tore the party apart in the process.

A former aide, briefly, to the late president Francois Mitterand, Hollande has also been a member of the French National Assembly for the largely rural constituency of Correze for much of the past 20 years, as well as the mayor of Tulle, its provincial capital, (pop. 15,600) from 2001-08.

But though he was a graduate of France’s elite Ecole Nationale d’Administration, he has never run a large organization or even held anything like ministerial rank. He is 57 and has been on a government payroll of one sort or another since his early 20s.

When he first ran for the party’s presidential nomination five years ago, he was crushed by his more telegenic partner (and the mother of his four children) Segolene Royal, who went on to lose to Sarkozy.

A year ago, when he contemplated running again, he barely registered three per cent in the polls.

But then the front-runner, the priapic Dominique Strauss-Kahn, then head of the International Monetary Fund, became caught up in a series of sex scandals and Hollande, in the midst of an image makeover, suddenly shot to the fore.

He doesn’t actually “channel” the former president in the transcendental sense, as far as anyone knows.

But as almost everyone who covered the French campaign observed, Hollande talks, walks and gestures like Mitterand, who was Europe’s socialist bulwark in the 1980s (and early ’90s) when Thatcherism and Reaganism were at their peak.

There was even the suggestion that Hollande has taken voice lessons to make him sound more like Mitterand.

Bitten by the political bug at 19, as a Socialist party volunteer in the 1974 presidential election, Hollande went on to became a special adviser to Mitterand after he won in 1981.

Just over a year later, he would take his boss’s advice to go off to Correze, at the tender age of 26, on what had all the makings of a fool’s errand — to try to build his own political base and take down Mitterand’s chief opponent, Conservative party heavyweight Jacques Chirac, on his home turf.

It was a tough slog, with mixed results. It took Hollande almost seven years to get elected in Correze; and Chirac would go on to win the presidency after Mitterand and then stun Sarkozy and the Conservative party last month by saying he would be voting for Hollande.

2. He has an assortment of nicknames

When he was the executive head of the Socialist party for 11 years, Hollande gained the reputation as someone who led from behind, in deference perhaps to the inflated egos of its office seekers and heavyweights.

In those days, he was known as Mr. Conciliator or Mr. Compromise, Britain’s the Daily Mail reported. Those who liked him called him the “man of synthesis” for his ability to sum up opposing party positions.

With his round glasses and even rounder features, he was often poked fun of in the press as Marshmallow Man and Monsieur Flanby, the latter after a particular French brand of caramel pudding.

During the 2007 campaign, when his then-partner Segolene Royal was running for the presidency, he would be ridiculed as Mr. Royal. His snobbier critics apparently also called him “the pizza-delivery boy,” because he would ride to work at Socialist party headquarters on a three-wheel scooter.

Three years ago he went on a diet, lost 30 pounds, and upgraded to designer glasses and a tailored wardrobe. A new, campaign-ready biography by political journalist Marie-Eve Malouines refers to him as Mr. Nice.

3. He has a very public romantic life

As a student at ENA, he met and took up with Segolene Royal, a party activist who also ended up working as an adviser to Mitterand.

Hollande and Royal never married but they were together for almost 30 years and had four children.

He supported Royal loyally when she ran for the presidency in 2007, (though she had beat him soundly for the party nomination the previous fall).

But they broke up right after the vote and it turned out that their last months together had been a sham as he had begun an affair with French journalist Valerie Trierweiler a year earlier.

Hollande and Trierweiler, a political writer with Paris Match, are still together and he refers to her as the love of his life.

And Royal played her part by campaigning for him this time, even appearing on the same stage, but with no visible enthusiasm.

She has also described him as being “incapable of action” and as having “achieved nothing in 30 years of public life.”

4. He is no fan of Anglo-American capitalism

How socialist is Hollande? That’s a debate that is really just beginning.

In the run-up to this campaign, many observers saw him as a compromising centre-left candidate, not unlike Britain’s former Labour prime minister Tony Blair, the Globe and Mail’s Doug Saunders wrote recently.

But beginning in late January and in these last weeks of campaigning in particular, he appears to have taken a more leftward tilt, some are now saying.

Hollande, in fact, stunned observers in January with the observation that “my opponent is the world of finance,” and that nations cannot be enslaved to the whims of the bond markets, positions he has repeated on several occasions since.

Britain’s influential Economist magazine called his ideas dangerous. The Financial Times, on the other hand, opined that he is merely talking left and will steer right.

But Britain’s Conservative Prime Minister David Cameron made a point of snubbing Hollande when he crossed the channel to London in March for a day of meet and greet.

Hollande told a New York Times interviewer that he had soured on American-style global capitalism during a student visit there in the 1970s.

But it is not clear whether these views are deeply held or just meant to present an election-period contrast with Sarkozy’s apparent infatuation with the lifestyles of the rich and famous.

Hollande’s economic platform calls for rolling back the retirement age from 62 to 60, hiring some 60,000 more teachers, holding off balancing the budget until 2017, and imposing a 75 per cent top tax bracket on those earning more than a million euros ($1.3 million) a year. “I don’t like the rich,” he is reported to have once said.

He has also promised to cut his presidential salary by a third and do away with the judicial immunity that a French president enjoys.

5. He had a conflicted childhood

No profile of Hollande would be complete these days, it seems, without a bit of psychoanalysis, thanks to Serge Raffy, the editor of Nouvel Observateur and an early Hollande biographer.

Raffy’s take is that the young Hollande suffered under an authoritarian father, a doctor who ran in local elections under an extreme right-wing platform and was forced to uproot his practice and move his family abruptly because of the community reaction to these views.

Hollande’s mother, by contrast, was seen by her son as an almost sainted social worker who ran for the Socialists in National Assembly elections in 2008, about a year before she died.

But it was the father’s anger that shaped the young Hollande’s apparently life-long dislike of confrontation and desire to forge consensus.

“Contrary to what his detractors believe,” Raffy writes, “the man is neither cunning nor cynical, he is simply in an posture of avoidance.”