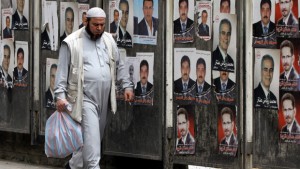 Syrians voted in a parliamentary election on Monday touted by authorities as a milestone of political reform but dismissed by the opposition as a facade while people are killed every day in an anti-government uprising.

Violence persisted across the country between forces loyal to President Bashar al-Assad and rebels fighting to end four decades of dynastic rule by his family.

“All of this is a theatre show. The candidates are businessmen and pawns of strong people in power,” one man, who asked to remain anonymous, told Reuters near a polling station in the capital.

In northern Idlib province, residents reported gunfire and explosions and in the city of Hama rebels and soldiers clashed early on Monday, the British-based Syrian Observatory for Human Rights said.

In the eastern province of Deir al-Zor, three dissidents were killed in a dawn raid by government troops, the Observatory added, underlining the challenge of holding a credible poll and complicating the task of U.N. observers monitoring a ceasefire declared on April 12.

Unlike autocratic leaders in Tunisia, Egypt, Libya and Yemen who were toppled by the Arab Spring, Assad has kept enough support among the military and his Alawite sect, which dominates the army and security apparatus, to withstand the 14-month-old revolt.

Assad dismisses the uprising as the work of foreign-backed “terrorists” and, counting on the diplomatic support of longtime ally Russia, says he will carry out his own reform program. But the ferocity of the crackdown has appalled people across the globe and many foreign governments have urged him to step down.

Since succeeding his father Hafez al-Assad in 2000, Assad has relied on a pliant parliament to rubber-stamp the will of the ruling family in the majority Sunni Muslim country.

The assembly currently does not have a single opposition member and official media said half the seats would be reserved for “representatives of workers and peasants,” whose unions are controlled by Assad’s Baath Party.

Opposition figures are boycotting the vote, saying Syria’s revised constitution – which allowed new political parties to be set up this year – has changed nothing.

Activist Musaab al-Hamadee said people were striking in Hama – a city with a bloody history of opposition to the Assads – and that activists were burning tires in the streets.

In Qalaat al-Madeeq, a village in Hama province, video which activists say was filmed on Monday showed the streets completely deserted and shops shuttered.

“Today is the Syrian parliamentary poll and we say to you Bashar al-Assad that there are no people in Qalaat al-Madeeq voting. You’ve displaced people and killed women and children. We are on strike,” a man filming in Hama said off-camera.

Election posters, mostly of pro-Assad candidates, hung in central Damascus and regions where Assad still retains strong authority but there appeared to be fewer in outlying areas that form the bedrock of the revolt.

State television channels aired footage from polling centers across the country, showing people ticking boxes on ballot papers and slipping them into plastic boxes. Despite heavy media coverage in recent days, there has been little discussion of candidate policies or political leanings.

In one Damascus polling station 137 people voted in the first three hours, authorities told Reuters. But reporters only observed three people voting there during 40 minutes.

Reem al-Homsi, a recent university graduate, said she voted because she wants what is best for her country.

“I want a normal life and I want a job,” she said.

Louay Hussein a centrist activist who heads the Movement for Building a State, said the elections were “window-dressing” and would not shift the balance of power in Syria.

“It does not matter who votes. It is a forged election -against the will of Syrians with no popular participation. The Syrian parliament has no authority over a single intelligence officer. It has no power in the country at all,” he said.

Independent politician Qadri Jameel said he was running “because we believe we can turn the election into a starting point of a political process, and to decrease the level of violence so as to reach dialogue.”

Authorities say 14 million people are eligible to vote, including expatriates, and 7,195 candidates are fighting for a 250-seat parliament.

In the Sunni Muslim town of Madaya, a rural centre of the revolt 30 km (20 miles) north of Damascus, there was no sign of an election campaign. In the nearby town of Zabadani, there were a few pictures of one candidate.

“He is the only one running and he will win of course, even if we do not vote for him,” said a Zabadani resident called Yasser.

More prominent were pictures of young men killed by Assad’s forces, plastered on shuttered shops and facades of buildings. “Vote for your candidate to parliament, the martyr Nour Adnan al-Dalati,” read one poster, mocking Monday’s election.

Photo: A Syrian man walks past campaign posters for the upcoming parliamentary election in Damascus, May 1, 2012