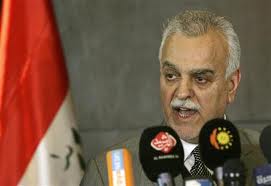 Iraq’s fugitive vice president on Friday described a terror trial pending against him in Baghdad as part of a political vendetta that has wider repercussions for Iraqi unity and sectarian tensions across the Middle East.

The trial in absentia of Tariq al-Hashemi, a Sunni Muslim, was postponed Thursday as his lawyers appealed to have parliament create a special court to hear the case that could deepen Iraq’s sectarian divide. Al-Hashemi has denied charges that he ran death squads that targeted government officials, security forces and Shiite pilgrims.

Al-Hashemi also alleged that Iraqi Prime Minister Nouri al-Maliki, a Shiite, may have engineered the trial to snuff out domestic opposition in case he is threatened by a revolt in Iraq similar to that in neighboring Syria.

“It could be a pre-emptive attack” stemming from concern about the upheaval in Syria, al-Hashemi said in an interview with The Associated Press in Istanbul.

“Al-Maliki apparently is very much sensitive to what’s going on in Syria. So from the sectarian angle, he tried to immunize himself in the future in addressing one of the principal political rivals,” he said, referring to his role as a frequent critic of al-Maliki.

A media adviser for al-Maliki disputed claims that the vice president was being targeted for political reasons and said the government does not interfere in the judicial system.

“We do understand that al-Hashemi might say anything to protect himself,” spokesman Ali al-Moussawi said. “The fugitive vice president should go to court and defend himself instead of launching accusations and allegations.”

The case against al-Hashemi highlights rifts that haunt Iraq after decades of dictatorship, war and civil conflict, and the departure of American troops. It also follows regional revolts that have toppled or undermined authoritarian leaders in the Middle East.

Most in the Syrian opposition, for example, come from the country’s Sunni majority, while President Bashar Assad’s regime relies on the minority Alawites, an offshoot from Shiism. Sunni Arab leaders in the Gulf see the Shiite-led government in Iraq as too soft on Syria, where the United Nations estimates at least 9,000 people, many of them civilians, have died in a government crackdown on dissent.

Additionally, regional powers Iran, led by a Shiite theocracy, and Turkey, which is mostly Sunni but espouses unity across sectarian lines, have supported opposing factions in Iraq.

Al-Hashemi, who fled to Iraq’s self-ruled northern Kurdish region in December to avoid arrest, warned of regional spillover if Iraq’s factions cannot unite and address the mismanagement that he blamed on al-Maliki.

“Iraq is the core of the geopolitical scene in the area. Whatever happens in Iraq is going to affect the neighboring countries,” he said. “We could end up in some sort of sectarian polarization in the Middle East.”

Iraq’s political crisis pits the mostly Shiite leadership against Sunnis and Kurds who accuse it of consolidating power even as public services deteriorate and security remains vulnerable. Last week, Massoud Barzani, president of the Kurdish autonomous region, threatened to let Kurds vote to secede from Iraq if the government crisis has not been resolved by regional elections in September.

In the AP interview, al-Hashemi said he understood the frustration that led Barzani to talk about partition but said the possibility was “not on the table” in Kurdish circles, at least for now.

“I sit down from time to time with Kurdish leaders and we talk freely and openly about the subject,” al-Hashemi said. “All politicians are very much interested in reaching a political solution rather than jumping into an Iraqi partition.”

On his own dilemma, the vice president held out hope of a settlement.

Then he added: “The whole case is politically motivated, so it is waiting for a political solution, not a legal solution.”