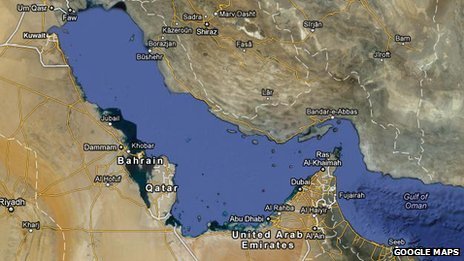 Iranians have been complaining that Google Maps now has no name on the body of water they call the Persian Gulf and is also known as the Arabian Gulf.

The issue has stirred controversy in recent years between Iranians and Arabs, who each say their name is the only one that should be used.

A Google representative told the BBC it did not name every place in the world.

He said the company also did not want to take any political stance in response to the angry Iranian reaction.

He was unable to provide an example of a similar case of a missing landmark.

The fact that the blue space between Iran and Arab Gulf states is now nameless on Google Maps shows just how heated the issue has become.

Iranians say there is absolutely no historical justification for calling it anything but the Persian Gulf.

But there has been increasing pressure from Arab sources to call it the Arabian Gulf – or at least to use both names.

Several years ago, Iranians launched an internet offensive after National Geographic did just that.

As a result, anyone searching for the Arabian Gulf on Google found a website saying it did not exist.

A number of Iranians have posted on twitter a link to Google Maps with the question: “Where’s the Persian Gulf?”

They could look at Google Earth – another interactive world map provided by the internet giant.

It still appears there – as does the alternative, the Arabian Gulf.

This inland sea of some 251,000 km² ( 100,000 sq miles) is connected to the Gulf of Oman in the east by the Strait of Hormuz; and its western end is marked by the major river delta of the Shatt al-Arab, which carries the waters of the Euphrates and the Tigris. Its length is 989 kilometers ( 615 miles) , with Iran covering most of the eastern and northern coast and the Arab Gulf states covering all of the western and southern coast. The Arabian / Persian Gulf is about 56 kilometers ( 35 miles) wide at its narrowest, in the Strait of Hormuz. The waters are overall very shallow, with a maximum depth of 90 meters ( 295 ft) and an average depth of 50 meters ( 164 ft) .

Countries with a coastline on the The Arabian / Persian Gulf are (clockwise, from the north): Iran, Oman (exclave of Musandam), United Arab Emirates, Saudi Arabia, Qatar on a peninsula off the Saudi coast, Bahrain on an island, Kuwait and Iraq in the northwest. Various small islands lie within the The Arabian / Persian Gulf, some of which are the subject of territorial disputes between Iran and the UAE.

Based on the coastline length on the Gulf the Arabs perhaps should be more angry at Google than the Iranians for not naming it the Arabian Gulf.