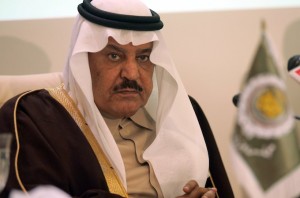 Saudi Arabia repeated on Wednesday that it would not tolerate threats to the Gulf Arab states’ sovereignty, the latest warning to Iran after President Mahmoud Ahmadinejad’s visit to an island claimed by both Tehran and the United Arab Emirates.

The warning, the third in as many weeks by a member of the six-nation Gulf Cooperation Council (GCC), comes amid increased nervousness in the region over Iran.

Shi’ite-led unrest is resurgent in Bahrain a year after the ruling Al Khalifa family brought in Saudi and UAE troops to help suppress an uprising seen by Sunni Muslim Gulf rulers as sectarian in nature and driven by Shi’ite giant Iran.

“Any harm that comes across any of our countries is harm that touches us all,” Saudi Arabia’s Crown Prince Nayef said in a speech at a meeting of GCC interior ministers in Riyadh.

Nayef also condemned what he called Iran’s “occupation” of the islands and its role in events in Bahrain.

“We stress that Saudi Arabia and the rest of the council countries are standing in a unified line with Bahrain and the UAE to protect sovereignty and stability, considering their security a part of the council’s security as a whole.”

Ahmadinejad made a rare visit on April 11 to Abu Musa, one of three Gulf islands also claimed by the UAE and located near oil shipping routes at the mouth of the Gulf, the Strait of Hormuz.

Saudi foreign minister Prince Saud al-Faisal said in a speech over the weekend that Gulf Arab states are pushing ahead with plans for a political union that would involve joint foreign and defense policies, an idea floated by Saudi King Abdullah last December.

After Ahmadinejad’s visit to Abu Musa, some 60 km (40 miles) off the UAE coast, the Islamic Republic said its sovereignty over the three islands was not negotiable but it has also called for talks with the UAE to clear up “misunderstandings”.

Iranian Foreign Minister Ali Akbar Salehi, quoted by the student news agency ISNA, said Iran wanted to “have the best possible relations with the UAE, as our trade and economic relations are significant.”