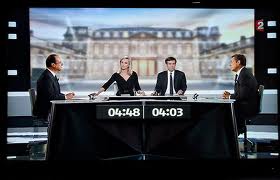 President Nicolas Sarkozy struggled to make inroads against Socialist challenger Francois Hollande as the only debate in France’s presidential election descended into an exchange of insults and accusations.

Behind in the polls with the clock ticking on his re- election bid, the incumbent repeatedly accused his rival of lying, while Hollande said his opponent showed he was being “disagreeable.”

“It was a harsh debate,” said Frederic Dabi of the Ifop polling company. “Sarkozy sought to knock out Hollande and Hollande sought to weaken Sarkozy’s legitimacy and provoked him at the start.”

The 170-minute encounter late yesterday was Sarkozy’s last chance to turn the tide against Hollande before the May 6 runoff. The challenger led with 53 percent to 47 percent, a survey by Ifop showed yesterday. There was no margin of error published.

The two candidates sat 2 1/2 meters apart in their first face-to-face confrontation of the campaign. The event was broadcast on eight television channels and six radio stations.

The moderators, television newscasters Laurence Ferrari of TF1 and David Pujadas of France2, often struggled to keep the debate within schedule and on subject, as the two candidates interrupted each other and talked beyond their alloted time.

The candidates clashed on how to fight Europe’s debt crisis and how to rekindle growth with joblessness in France at the highest level in 12 years. Germany’s unemployment rate is 6.8 percent, against 9.8 percent in France.

Europe faces a “possible resurgence of the crisis due to a lack of growth,” Hollande said. France has no alternative to cutting its debt and deficit, Sarkozy replied. “Growth, yes, but not at the expense of cutting debt and deficit,” Sarkozy said.

While Hollande advocated the issue of euro bonds guaranteed by the 17 countries using the common currency, to raise funding for debt-strapped countries, Sarkozy reiterated his opposition to such securities. Germany is opposed to euro bonds.

“Who will guarantee them if it’s not France and Germany?” he said. “Should we raise our debt to pay the debts of others? It’s irresponsible.”

Sarkozy said the European Central Bank has done “pretty well” in fighting the region’s sovereign debt crisis given the constraints of its mandate.

“I think the ECB has done pretty well,” Sarkozy said. “This is a global crisis. You think it was easy? I’m not sure you’d have done much better than us. Europe has got out of the crisis.”

One of the most heated clashes came over immigration, with Hollande saying that foreigners who have been in France for five years should be allowed to vote in local elections and Sarkozy saying it would open the way for Muslims to impose laws in the officially secular country.

When Hollande asked Sarkozy why he equated all foreigners with Muslims, Sarkozy shot back that it was “denying reality” to suggest that most migrants didn’t come from North Africa. “Muslims are treated better in France than Christians are in Orient,” Sarkozy said.

To Sarkozy’s accusations of deceit, Hollande said “that’s a leitmotif that’s really starting to annoy me,” adding later: “You are not able to have one exchange without being disagreeable. And you claim you are a uniter.”

“I won’t accept lessons from a political party that was enthusiastically uniting behind Dominique Strauss-Kahn,” Sarkozy said.

Strauss-Kahn left his job at the IMF last year after facing charges of raping a maid in a New York hotel room. Prosecutors later dropped the case. The former Socialist minister also dropped his ambitions to run for the French presidency following the scandal.

“I was sure you were going to bring that up,” Hollande retorted. “You put him at the head of the IMF.”

“Nicolas Sarkozy seemed a little bit off track,” she said on Europe 1 radio after the debate. “I’m a bit disappointed.”