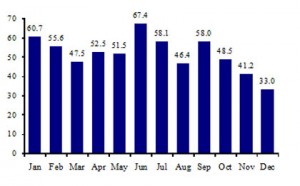 Byblos Bank issued, in cooperation with the American University of Beirut through the Olayan School of Business, the results of the Byblos Bank/AUB Consumer Confidence Index for the fourth quarter of 2011

The results show that the Byblos Bank/AUB Consumer Confidence Index declined in October, November, and December 2011, and reached its lowest point on a monthly basis in December since the Index’s inception in July 2007. Also, the Index posted its lowest level in the fourth quarter of 2011 since the third quarter of 2007. Further, the results revealed that the level of consumer confidence declined across all 26 sub-categories of the Index during the fourth quarter of 2011.

Mr. Nassib Ghobril, Chief Economist and Head of the Economic Research and Analysis Department at Byblos Bank Group, said “The escalating Syrian crisis and the dispute over the minimum wage and salary adjustment issue were the main factors affecting the confidence of Lebanese consumers during the fourth quarter of 2011.” He added that “the increase in the cost of living and the deterioration in the quality of basic day-to-day public services also affected consumer confidence.”

The analysis of the results revealed that the near-term expectations of consumers were consistently higher than their views of their current conditions during the fourth quarter of 2011, in line with past trends. However, both the Byblos Bank/AUB Present Situation Index and the Byblos Bank/AUB Expectations Index regressed during the fourth quarter of last year. “We expect economic activity to remain anemic during at least the first half of 2012, given the low level of consumer confidence, and especially because of consumers’ declining level of expectations about near-term conditions, in the absence of any concrete measures or developments to improve their confidence level,” indicated Mr. Ghobril of Byblos Bank.

In parallel, the results show that the December survey posted the highest percentage of pessimistic respondents since the start of the survey in terms of personal financial conditions, business conditions, and personal borrowing plans. The analysis revealed that 23 out of 26 sub-categories of the Byblos Bank/AUB Consumer Confidence Index posted record lows during the fourth quarter of 2011.

The Byblos Bank/AUB Consumer Confidence Index is a measure of the sentiment and expectations of Lebanese consumers towards the economy and their own financial situation, in line with leading consumer confidence indices worldwide. It is composed of two sub-indices, the Byblos Bank/AUB Present Situation Index and the Byblos Bank/AUB Expectations Index. The first sub-index covers the current economic and financial conditions of Lebanese consumers, and the second one addresses their outlook over the coming six months. In addition, the data segregates the Index based on age, gender, income, profession, administrative district, and religious affiliation. The Index has been calculated on a monthly basis since July 2007, with January 2009 as its base month. It is based on a nationally representative survey of 1,200 face-to-face interviews with adult males and females living throughout Lebanon. The monthly field survey is conducted by Statistics Lebanon, a market research and opinion polling firm.