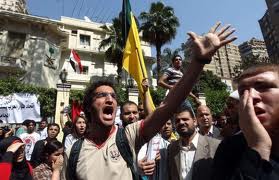 Saudi Arabia said on Saturday it had recalled its ambassador from Egypt for “consultation” and would close its embassy and consulates in the Arab nation.

State news agency SPA said the reason behind the diplomatic move was “unjustified protests” in Egypt and attempts to storm the Saudi embassy and consulates which “threatened the safety of its employees”.

Egyptians have protested outside the embassy over the arrest of an Egyptian lawyer and human rights activist in the kingdom. Egyptian activists had said the lawyer was arrested for insulting King Abdullah after filing a complaint against Saudi Arabia for its treatment of Egyptian citizens in Saudi prisons.

Saudi Arabia said he was arrested in possession of drugs.

Photo: Egyptians protesting outside the embassy over the arrest of an Egyptian lawyer and human rights activist Ahmed Mohammed al-Gizawi on arrival at Jeddah airport last week. Saudi Arabia said he was arrested for possession of drugs