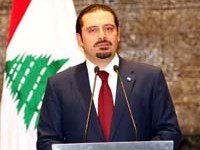 A special U.N.-backed court for Sierra Leone found Taylor guilty of aiding and abetting war crimes during the civil war in Sierra Leone.

“It is … a day of hope for Syrian people that one day Bashar Assad will be held accountable for his crimes against his own people,” he was quoted by Lebanese newspaper The Daily Star as saying.

A U.N.-backed court is investigating the 2005 assassination of Hariri’s father, former Lebanese Prime Minister Rafik Hariri. There were allegations that Syria had a role in the assassination.

Damascus is under pressure from the international community to end its 13-month campaign against pro-democracy groups and rebel forces in the country.

The U.N. Security Council recently authorized deploying as many as 300 monitors to Syria for 90 days.

“This is the third fatal incident involving the Red Crescent in less than eight months,” said Abdul Rahman al-Attar, the president of the Syrian Arab Red Crescent, in a statement.