Lebanese facing a new wave of deportation from UAE 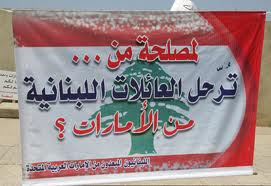 A new wave of deportations of Lebanese nationals living in the UAE is underway, following the collective expulsion of a number of families in 2009.

In the past couple of weeks, nine people from the Bekaa village of Yehmor returned to home from the United Arab Emirates (UAE). This was shortly after they had suddenly been called into their local police stations in the Gulf emirate.

Within a few days of being summoned to their local police station, they found themselves at Rafik Hariri International Airport in Beirut. Most of them were forced to leave everything behind. Some were given a “lenient” exit deadline by the UAE security agencies of 15 days.

One Lebanese national was expected to liquidate the fruits of 17 years worth of work in the UAE in just 15 days. The security forces came and seized the restaurant he had established. His residence permit was cancelled for no apparent reason. He had not committed a crime and he was not in the habit of discussing politics. His criminal record is spotless.

He tried to negotiate with the UAE security agents for one thing. He did not ask for the restaurant, the UAE, or any such thing. He just wanted his wife and two children to be able to stay long enough for his kids to finish their school year. But the authorities refused, revoking his residence permit then and there.

He knew nothing but his restaurant. There is no sectarianism in food. He did not even pray at a mosque there, so “he wouldn’t raise anyone’s ire,” he said, trying to put it gently. The fact is he did not pray so they would not know his sect.

The information that the Emirati security agents were interested in was about Hezbollah. The document did not state that literally, but the deportees say that the Emiratis were clear from the start. The questions they asked them were straight and to the point.

The issue of the deportees is strictly a humanitarian issue. The Emiratis are the ones who want to politicize it.At a meeting of the deportees committee, the voices varied between those of wisdom and of indignation. The attendees were looking “to the Lebanese state.” The “state” should shoulder its responsibilities. Where is the “state?” Who represents the “state?”

At the foreign affairs ministry and the UAE Embassy, no one managed to provide them with an explanation. Many questions were posed to the “state.”

One person asked to meet President Michel Suleiman so as to explain the situation to him. But, as usual, the president is traveling.

Others asked about the role of the Prime Minister Najib Mikati, but his name was quickly withdrawn because his recent position on Iranian President Mahmoud Ahmadinejad was taken as an indicator that “he would side with the Emiratis.”

In any case, the deportees have nothing to do with these tensions. The head of the committee, Hassan Alian, believes that all this analysis is pointless. The issue of the deportees is strictly a humanitarian issue. The Emiratis are the ones who want to politicize it.

Most of the deportees own restaurants and have families that grew up in the Gulf. That is what Speaker of the Parliament Nabih Berri told the Emiratis on his last visit there after the first wave of deportations one and a half years ago.

The number of deportees, according to Alian, is 350. Berri had reassured them that “it is over.” But more Lebanese (30 people, according to the committee, which is unable to communicate with all the deportees) have been expelled over the last two months. The committee believes Berri, but thinks the Emiratis “lied to him.”

The deportees distinguish between the former ruler of the UAE, Sheikh Zayed bin Sultan Al Nahyan, and the current rulers. They loved the former and have been surprised by the behavior of his children.

This document effectively obliged the signatories to give information, but they were never asked about President Suleiman or Prime Minister Mikati.

The information that the Emirati security agents were interested in was about Hezbollah. The document did not state that literally, but the deportees say that the Emiratis were clear from the start. The questions they asked them were straight and to the point.

Within a few days of being summoned to their local police station, they found themselves at Rafik Hariri International Airport in Beirut. Most of them were forced to leave everything behind.

If one reviews the paper prepared by the deportees committee containing the names of the Lebanese expelled from the UAE, it will become clear that they are all from the “Hezbollah milieu”, which is, of course, considered as sympathetic to the party.

The deportees are accusing Lebanese security agencies of coordinating with the Emiratis. The deportees say the UAE authorities recounted details about their lives and their families’ lives in Lebanon and then offered them one last chance to avoid deportation by agreeing to become foreign agents. This certainly seems to suggest the “cooperation” of the Lebanese government.

Security in Lebanon is a well-known game. If the testimonies of the deportees regarding the information available to the Emiratis about their private lives and those of their families in Lebanon are true, then this is something of a troubling situation.

One person tried to “play” the Emiratis. He said he would cooperate with them against Hezbollah. But he was soon discovered. “Somehow,” people in his village found out about his working “against the resistance.” His reputation was ruined.

Another man, not a “friend” of Hezbollah, was deported because, like the overwhelming majority of the deportees, he refused to cooperate with the Emirati security services because he was “in the Gulf to work only.”

There are 30,000 Lebanese nationals in the UAE, and the threat of deportation looms over all of them. It seems that in the past two weeks, the Emiratis have started to push the issue.