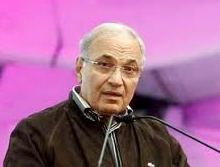 Egypt’s election commission on Tuesday disqualified an ex-premier from running for president because of a law that bans senior officials from the deposed Hosni Mubarak regime from running for office.

The disqualification is the latest twist in an already turbulent process aimed at replacing Mubarak, who stepped down after a popular uprising in February 2011. The commission earlier nixed 10 other candidates on technical grounds, including three of the front-runners, with elections due to start in a month.

The unruly process of picking a new president is just the latest sign of turmoil in post-Mubarak Egypt.

The 14 months since his resignation have been marked by harsh criticism of the ruling military council that took over after Mubarak stepped down, frequent clashes between protesters and security forces, a crime wave and relentless economic woes.

The latest candidate to fall was Ahmed Shafiq, Mubarak’s prime minister during the 18-day uprising. His disqualification quickly followed approval by Egypt’s military rulers of a law passed by the Islamist-dominated parliament, banning senior Mubarak-era officials who served in the past 10 years from running for office.

The law was aimed at Shafiq and another candidate, Omar Suleiman, who was Mubarak’s longtime spy chief and was named vice president at the end of his reign. Suleiman entered the race late, provoking outrage from those who led the uprising.

Suleiman was disqualified on other grounds before the law was ratified.

The two main Islamist candidates — from the dominant Muslim Brotherhood and the ultraconservative Salafi wing — were also among the first 10 to be ruled out, throwing the race into turmoil. The first round of voting is set for May 23-24.

A final list of candidates is set to be issued on Thursday.

According to the presidential election law, the commission’s decisions can’t be appealed.

Before the decision, Shafiq’s campaign issued a statement calling the law “a shame and a constitutional sin” that will cast a shadow over the elections because it targets individuals. The statement was carried on the official news agency MENA.

Tuesday’s decision leaves a dozen contenders in the race, narrowing it to competition between second-line Islamists and former Arab League chief Amr Moussa, a seasoned secular politician. Moussa has also served under Mubarak as foreign minister, but he doesn’t fall under the disqualification law because he left office in 2001.

The fundamentalist Muslim Brotherhood, banned for decades, has emerged as the strongest political power in Egypt, dominating parliamentary elections, shocking and worrying the largely secular activists who engineered the uprising.

Liberals, Islamists and the military have been in a power struggle for months.

On Tuesday, the Islamist-dominated parliament rejected the military-appointed Cabinet’s economic plan, which some called vague. That sets back the government’s efforts to secure a more than $3 billion International Monetary Fund loan seen as crucial to boost the nation’s battered economy.

The IMF has made broad political consensus a condition for the loan. A statement by the IMF on Tuesday indicated that this prerequisite had not been met.

The presidential elections are the final stage of a turbulent transition, managed by the council of generals. The military has promised to hand over power to civilians by end of June after a president is elected.

The writing of the country’s new constitution remains an explosive issue. The generals said the constitution should be drafted before a president is elected, raising concern that the elections might be postponed if the document is not ready in time, and the military might try to keep itself in power.

The constitution process is frozen over a dispute about the makeup of the body that will write it. The parliament picked a team with a heavy Islamist majority, setting off an outcry. The parliament was then told to draw up a new list of participants, but that has not happened yet.

Also at stake in the constitution debate is how to divide power between the president and the parliament.