US releases results of 13,000-mph test flight over Pacific 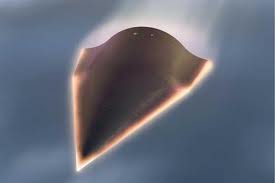 The results are in from last summer’s attempt to test new technology that would provide the Pentagon with a lightning-fast vehicle, capable of delivering a military strike anywhere in the world in less than an hour.

In August the Pentagon’s research arm, known as the Defense Advanced Research Projects Agency, or DARPA, carried out a test flight of an experimental aircraft capable of traveling at 20 times the speed of sound.

The arrowhead-shaped unmanned aircraft, dubbed Falcon Hypersonic Technology Vehicle 2, blasted off from Vandenberg Air Force Base, northwest of Santa Barbara, into the upper reaches of the Earth’s atmosphere aboard an eight-story Minotaur IV rocket made by Orbital Sciences Corp.

After reaching an undisclosed altitude, the aircraft jettisoned from its protective cover atop the rocket, then nose-dived back toward Earth, leveled out and glided above the Pacific at 20 times the speed of sound, or Mach 20.

The plan was for the Falcon to speed westward for about 30 minutes before plunging into the ocean near Kwajalein Atoll, about 4,000 miles from Vandenberg.

But it was ended about nine minutes into flight for unknown reasons. The launch had received worldwide attention and much fanfare, but officials didn’t provide much information on why the launch failed.

On Friday, DARPA said in a statement that the searing high speeds caused portions of the Falcon’s skin to peel from the aerostructure. The resulting gaps created strong shock waves around the vehicle as it traveled nearly 13,000 mph ( 20917 km/h), causing it to roll abruptly.

The Falcon, which is built by Lockheed Martin Corp., is made of durable carbon composite material, which was expected to keep the aircraft’s crucial internal electronics and avionics — only a few inches away from the surface — safe from the fiery hypersonic flight. Surface temperatures on the Falcon were expected to reach more than 3,500 degrees, hot enough to melt steel.

“The initial shock wave disturbances experienced during second flight, from which the vehicle was able to recover and continue controlled flight, exceeded by more than 100 times what the vehicle was designed to withstand,” DARPA Acting Director Kaigham J. Gabriel said in a statement. “That’s a major validation that we’re advancing our understanding of aerodynamic control for hypersonic flight.”

Sustaining hypersonic flight has been an extremely difficult task for aeronautical engineers over the years. While supersonic means that an object is traveling faster than the speed of sound, or Mach 1, “hypersonic” refers to an aircraft going five times that speed or more.

The Falcon hit Mach 20. At that speed, an aircraft could zoom from Los Angeles to New York in less than 12 minutes — 22 times faster than a commercial airliner. Take a look at what that looks like from the ground in the video below.

The August launch was the second flight of the Falcon technology. The first flight, which took place in April 2010, also ended prematurely with only nine minutes of flight time.

There aren’t any more flights scheduled for the Falcon program, which began in 2003 and cost taxpayers about $320 million.