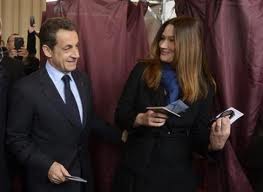 French voters headed to the polls on Sunday in round one of a presidential ballot, with economic despair on course to make Nicolas Sarkozy the first president to lose a fight for re-election in more than 30 years.

In a contest driven as much by a dislike of Sarkozy’s showy style and his failure to bring down unemployment as by policy differences, Sarkozy and his Socialist rival Francois Hollande are pegged to beat eight other candidates to go through to a May 6 runoff, where polls give Hollande a double-digit lead.

He would be only France’s second left-wing leader since the founding of the Fifth Republic in 1958, and its first since Francois Mitterrand, who beat incumbent Valery Giscard-d’Estaing in 1981.

He voted early on Sunday in Tulle, a town in central France where he serves as the head of local government for the surrounding rural Correze region.

“Here’s hoping,” he whispered in the ear of an old lady. His partner, journalist Valerie Trierweiler, admitted to hordes of journalists she was “super-stressed”.

Morning sunshine, which in theory could help turnout at the margins, was forecast to give way to cloud and rain later.

Hollande has called on his supporters to take nothing for granted, mindful of a fiasco for the left in 2002 when record poor countrywide turnout saw the Socialist candidate pushed out in the first round by the far right.

Interior ministry figures put the turnout by midday at 28.29 percent, a touch lower than the strong turnout of 2007, when the rate at the same time of day was 31.21 percent.

Sarkozy, also 57, says he is a safer pair of hands for future economic turmoil. But many of the workers and young voters drawn to his 2007 pledge of more pay for more work are deserting him as jobless claims hit a 12 year high.

He and his somberly-dressed ex-supermodel wife Carla Bruni voted in the affluent west-of-Paris suburb of Neuilly, shaking hands with bystanders but leaving without comment.

Many French people express a distaste for a president who has come to be seen as flashy after his highly publicised marriage to Bruni early in his term, occasional rude outbursts in public and chumminess with rich executives.

“Sarkozy’s divisive. Hollande’s reassuring,” said Helene Boudot, 85, who was glad to have been released from a hospital stay in time to vote in her village of Chailland in western France. She was counting on her son to drive her 100 metres to the local polling station.

Investors will be watching the first round to see how well tub-thumbing radical leftist Jean-Luc Melenchon performs. Melenchon, who wants an anti-capitalist revolution, has channelled outrage at the poor economy to become a popular figure on the campaign trail, neck-in-neck with far right leader Marine Le Pen for third place.

On Friday, the risk premium investors charge to hold French debt over safe-haven German bonds rose to nearly 1.50 percent, betraying fears that Hollande’s programme could be pulled to the left if Melenchon’s popularity leads to a strong bloc of seats for the far left after parliamentary elections in June.

Sarkozy has proven to be a more vigorous campaigner than Hollande, whose sober style, for some, lacks panache.

The president’s verve at the podium combined with his handling of a shooting drama in southwest France in March saw him claw back some ground in opinion polls last month. But he has since slipped back, leaving Hollande 10 or more points ahead in surveys for the deciding runoff.

Hollande is a whisker ahead for the first round, with an average 28 percent support in polls to Sarkozy’s 27 percent. Le Pen, who wants to curb immigration and take France out of the euro, has polled at around 16 percent and Melenchon at 14.

Polls close at 6 p.m. in some towns and at 8 p.m. everywhere, when the first official projections of the result based on a partial count will be released.

French law bans publication of any results before then in France, and the polling watchdog has threatened to punish any media breaking that embargo with fines and legal action.

During the last election, French voters hungry for information crashed the websites of several Swiss and Belgian newspapers.

Sarkozy has played up his credibility as an economic steward after he helped steer the euro zone through the worst of its crisis last year. Hollande has blamed him for the parlous state of France’s public finances and for the rating downgrade.

Some investors see a risk that Hollande’s focus on tax rises over spending cuts, his slower timetable for balancing the budget and his plan to raise taxation on the financial sector, could drive up French bond yields.