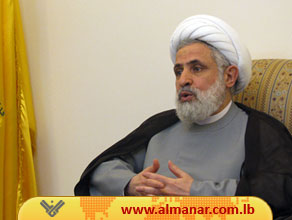 During an interview on Saturday with reporters from Al-Manar website, Hezbollah Deputy Secretary General Sheikh Naim Qassem sounded hopeful that a political solution is currently being sought for the Syrian crisis as part of UN-Arab League envoy Kofi Annan’s plan to end hostilities in the strife-stricken country.

Hezbollah’s number 2 denied that there were any splits in the composition of the army and security forces of the Syrian regime and also claimed that none of the employees in the Syrian embassies around the world quit their jobs.”

It is not clear on what basis he made the allegations , knowing that the Free Syrian Army FSA was formed by the members of the Syrian army and security forces that defected since the uprising began in March 2011.

Qassem said that Annan’s plan “ directly exposes the failure of the Arab and Western polices that were adopted previously, since the plan leans toward a political solution for the Syrian crisis , something which Western countries and some Arab states had downplayed.”

Regarding the measures taken to control alleged arms smuggling across the Lebanese-Syrian border, Qassem said: “This is exclusively the responsibility of the Lebanese army and Hezbollah is not responsible or concerned about controlling the borders, or any security missions that take place [there].”

As for the current relation between Hezbollah and the Palestinian Hamas movement, Qassem said: “our relation with Hamas movement is persistent, and is based on confronting the Israeli enemy. We don’t interfere in our allies’ stances. What concerns us is that the basic common standards remain, and this is present with Hamas, which we are constantly communicating and holding public meetings with.”

Hamas was based in Damascus , but pulled out last year and its leaders have offered support to the Syrian opposition in their strive for freedom, democracy and reform.

Qassem sidestepped a question about the murder of Al-Jadeed cameraman, Ali Shaaban, who was killed on the Lebanese side of the Syrian borders reportedly by Syrian army troops . Qassem said that Hezbollah is “not being acquainted with the final investigations and we did not contact the Syrian leadership to find out what happened “.

Al Jadeed owner Tahseen Khayyat told the station that the Syrian army attack was “deliberate and was not an accident,” stressing that “the vast number of bullets that riddled the car confirm that , adding ” we do not need at all an investigation from the Syrian side on this subject ”

Khreis told the channel: “If you see the car you would think it was in a war zone,”

Hezbollah, Syria’s primary ally in Lebanon, has backed the Syrian regime ever since the uprising began in March 2011, even though it backed all the other revolutions in Tunisia, Egypt , Yemen and Bahrain. The Iranian and Syrian-backed group claims that Syria is being targeted by foreign states because of its “rejectionist” stances and support of the resistance.