Panetta: Assad “will be taken down” 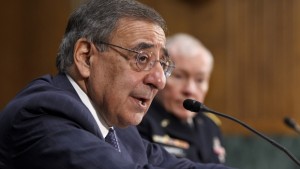 U.S. military leaders clearly expressed reluctance about using American might to stop the unending violence in Syria, insisting that diplomacy remains the best option to force President Bashar Assad to end the brutal crackdown on his own people.

Testifying before Congress, Defense Secretary Leon Panetta and Army Gen. Martin Dempsey, the chairman of the Joint Chiefs of Staff, outlined the steps the United States and other countries are taking to pressure the Assad regime after 13 months of bloodshed that has left more than 9,000 dead, according to the United Nations, and displaced tens of thousands. The steps range from tough sanctions to shared intelligence to $25 million in emergency humanitarian assistance.

Dempsey said if called upon, the military would be ready to act and the services are working on ways to try to halt the violence. But both he and Panetta set a high threshold for U.S. military involvement in a war in the Middle East after lengthy conflicts in Iraq and Afghanistan.

Pressed later on the issue, Panetta said, “At this point in time …a decision is that we will not have any boots on the ground and that we will not act unilaterally in that part of the world.”

The Pentagon leaders’ testimony came as representatives from Arab countries including Saudi Arabia, U.N. Security Council member Morocco and Qatar, plus Western powers such as the U.S., Britain and Germany, gathered in Paris to discuss ways of helping special envoy Kofi Annan’s peace plan to end the violence in Syria. Secretary of State Hillary Rodham Clinton was participating in the session.

Panetta said there were no easy solutions. “There is no silver bullet. I wish there was, but there isn’t,” he said.

At the same time, the Pentagon chief insisted that Assad’s days are numbered despite his formidable hold on power. The former CIA director said U.S. intelligence has concluded that the regime faces a broad-based insurgency that is striking back.

Assad “will be taken down,” Panetta said.

In a bipartisan response, House Republicans and Democrats echoed the military leaders’ reluctance about using force. Many members of the committee had challenged President Barack Obama last year after Obama dispatched the military to protect Libyans under siege in Benghazi. The rebel effort, with the help of NATO forces, toppled the decades-long regime of strongman Moammar Gadhafi.

Lawmakers complained that Obama failed to get congressional approval for his actions against Libya. Several members of the panel pressed Panetta on whether Obama would seek congressional authorization for any military operation against Syria.

“We won’t take any action without proper legal authority,” Panetta said, adding that Obama would act based on his constitutional powers and the War Powers Act.

The leaders of the committee cautioned against military force against Syria, acknowledging that the conditions created by Damascus were not comparable to Libya, with a united opposition and a united international community.

“I am not recommending U.S. military intervention, particularly in light of our grave budget situation, unless the national security threat was clear and present,” said Rep. Howard “Buck” McKeon, R-Calif., the committee’s chairman. “Nevertheless, these reflections lead me to wonder what the United States can do to stem the violence and hasten President Assad from power.”

Rep. Adam Smith of Washington State, the panel’s ranking Democrat, said the United States should support the Syrian people “but we must be extremely cautious as we discuss the potential for the use of military force.”

Their comments highlighted the split in Congress on military action. Sen. John McCain of Arizona, the top Republican on the Senate Armed Services Committee and President Barack Obama’s 2008 presidential rival, along with Sens. Joe Lieberman, I-Conn., and Lindsey Graham, R-S.C., have been outspoken in calling for military airstrikes against Syria.

McCain and Graham also were among a bipartisan group of lawmakers who introduced a resolution Thursday condemning the Syrian government for crimes against humanity and urging the president to collect information about such crimes to be used in an appropriate tribunal.

“If we bear witness today, justice will come closer for the Syrian people,” said Sen. Richard Blumenthal, D-Conn., in introducing the resolution. “The president and government of Syria, its leaders, and senior officials who are responsible for crimes against humanity will be brought to account for such crimes.”