No more bugs in Starbucks’ Frappuccino 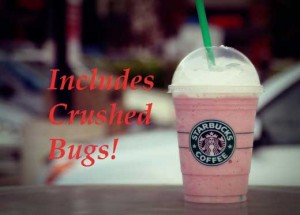 After outrage from vegans and vegetarians over the coffee chain’s use of red dye made from insects, Starbucks President Cliff Burrows announced a transition to a less offensive food coloring, the Los Angeles Times reports. Cochineal extract, the dye that lends a pretty crimson hue to the coffee mogul’s Strawberry Banana Smoothie, Strawberries and Crème Frappuccino, Rasperry Swirl Cake and Birthday Cake Pop, is actually made from the tiny, white Dactylopius coccus. The insects, typically found on cacti in Latin America, exude a vibrant red color when crushed.

Cochineal extract has been used as a traditional dye for centuries and is approved as a food coloring by the U.S. Food and Drug Administration. (Although the FDA does require companies to notify consumers if a product contains carmine dye, another name for the coloring; as ABC notes, the World Health Organization has found it to cause allergies.)

But still, ew, bugs. After a distraught barista decried the use of the extract on ThisDishIsVegtarian.com last month, more than 6,500 customers signed a Change.org petition to force the coffee giant to change its practice. Though Starbucks initially defended the bug juice as a natural ingredient and noted that it’s widely used in the food industry, the company eventually conceded.

“As our customers you expect and deserve better – and we promise to do better,” Starbucks’ U.S. President Cliff Burrows posted in a blog Thursday, apologizing and announcing a June deadline for the phase out of the extract in exchange for lycopene, a vegetarian-friendly tomato-based dye.