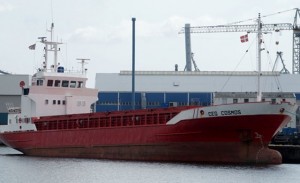 A German ship that is suspected of transporting Iranian arms to Syria is being diverted to an unspecified port for inspection, a German government spokeswoman said on Sunday.

She said she did not know specifically where the ship would dock for the inspection.

On Saturday, the economy ministry had said it was investigating a report that the German-owned ship in the Mediterranean en route to Syria was carrying Iranian weapons in breach of an arms embargo.

German magazine Der Spiegel, which broke the story, reported on its website that the Atlantic Cruiser had been chartered to a Ukraine-based company, White Whale Shipping, which had declared the cargo as “pumps and the like”.

Der Spiegel quoted ship broker Torsten Lueddeke of Hamburg-based C.E.G. Bulk Chartering as saying: “We stopped the ship after we received information on the weapons cargo.”

Der Spiegel reported the ship had loaded the cargo in Djibouti this week and changed course for Iskenderun in Turkey on Friday when the cargo was at risk of being uncovered.

The ship stopped about 80 km (50 miles) southwest of the Syrian port of Tartus, its initial destination, it said. No other details were available on its movements.

On Sunday, Spiegel reported that the ship had turned off its radio transmitter, which allows it to be tracked, thus making its location uncertain.

Western sanctions imposed on the government of Syrian President Bashar al-Assad include an arms embargo and a ban on importing Syrian oil into the European Union.

According to German law, a breach of such embargoes can lead to a maximum five-year prison sentence or a fine.

Spiegel also reported that the government was asking embassies in the region to alert their host governments to a possible breach of embargo by the ship, especially those in Cyprus, Lebanon and Turkey. The ministry spokeswoman confirmed the report.

Cyprus’s Foreign Minister Erato Kozakou-Markoullis said on state television on Saturday she had given instructions not to grant permission to the ship to approach the island.