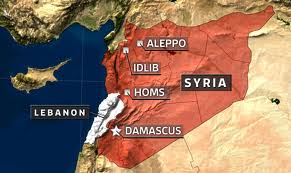 The U.N. Security Council voted unanimously on Saturday to deploy the first wave of U.N. military observers to monitor a fragile cease-fire between the Syrian government and opposition fighters.

The vote marked the first time U.N. diplomats on the council all agreed on a resolution since the conflict began more than a year ago.

It calls on both sides to immediately “cease all armed violence in all its forms.” It also calls on the Syrian government to implement the six-point peace plan put forward by international envoy Kofi Annan, including the pull-back of troops and heavy weapons from cities and town.

The resolution calls for the deployment of an advance team of up to 30 unarmed military observers to initiate contacts with both sides and begin to report on whether there has been “a full cessation of armed violence in all its forms by all parties.”

The council said it intends to immediately establish a larger U.N. supervision mission after consultations between Secretary-General Ban Ki-moon and the Syrian government.

Deployment of a larger force will be “subject to a sustained cessation of armed violence in all its forms by all parties.”

Annan’s spokesman, Ahmad Fawzi, has said that Annan — who is an envoy on behalf of the U.N. and the Arab League — envisions a mission with about 250 observers.

Russia and China vetoed two previous resolutions that would have condemned President Bashar Assad’s government for its bloody crackdown on protesters and raised the threat of possible further action.

They argued that the resolutions were not balanced and didn’t address the attacks by rebel fighters.

In the debate on the resolution adopted Saturday, Russia submitted a rival text to the U.S. and Western-backed draft, and raised questions Friday evening about the final draft. But Ambassador Vitaly Churkin told reporters before Saturday’s vote that Moscow “was satisfied” and would vote “yes.”

The cease-fire, which formally took effect Thursday, is at the center of Annan’s peace plan, which is aimed at ending more than a year of bloodshed that has killed over 9,000 people, according to the United Nations, and to launch inclusive Syrian-led talks on the country’s political future.

Annan called for speedy deployment of U.N. monitors and his spokesman Ahmad Fawzi told a news conference in Geneva on Friday that an advance team of “around 10 or 12” observers, that could quickly be increased to 30, was “standing by to board planes and to get themselves on the ground as soon as possible” once the Security Council approved their deployment.