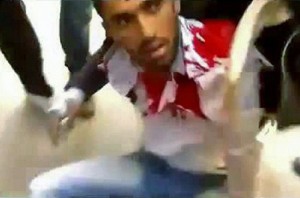 Syrian troops and rebel fighters carried out attacks across Syria on Saturday, killing at least nine people in a surge of violence that threatened a U.N.-brokered cease-fire. The bloodshed came as the U.N. Security Council considered whether to send the first wave of military observers to monitor the fragile truce between the two sides.

The heaviest fighting was reported in the central city of Homs where regime forces shelled rebel-held neighborhoods, while rebel fighters fired rocket-propelled grenades at an area of regime loyalists. In Aleppo, Syria’s largest city, regime forces opened fire on mourners at a funeral, while rebel gunmen ambushed a car carrying soldiers in the southern province of Daraa.

The two sides have traded allegations of scattered violations since the truce formally took effect Thursday. However, Saturday’s reports of the use of heavier weapons suggested the cease-fire was coming under increasing jeopardy.

The cease-fire is at the center of a broadly backed peace plan by special envoy Kofi Annan. It is aimed at ending the 13-month-old conflict that has killed over 9,000 people and launching talks on the country’s political future.

U.N. Security Council members prepared for a vote on Saturday after meeting behind closed doors for several hours the day before to discuss rival drafts by the U.S. and its European allies and by Russia, Syria’s most important council ally.

Both called for the deployment of an advance team of up to 30 unarmed military observers to initiate contacts with both sides and begin to report on implementation of “a full cessation of armed violence in all its forms by all parties.”

Homs is one of the cities hit hardest by the regime crackdown on mass protests that erupted in March 2011 and sought President Bashar Assad’s ouster.

Sporadic shelling by regime forces began late Friday and continued Saturday, said the Britain-based Syrian Observatory for Human Rights, an activist group. The Observatory said one civilian was killed, the first to die in a shelling attack since the cease-fire.

“I can see black smoke billowing from a building that was hit in Jouret el-Shayah,” local activist Tarek Badrakhan, based in the neighborhood of Khaldiyeh, told The Associated Press via Skype.

Badrakhan said the body of the man remained in the street for several hours, with people unable to approach it due to the shelling and sniper fire.

A video posted online by an activist said to be taken in Homs showed shells landing in a heavily damaged street. The Observatory said regime forces also fired mortar shells at neighborhoods in Homs throughout the day.

The regime restricts access of foreign observers, including journalists, making it difficult to verify reports of violence independently.

In the northern city of Aleppo, Syria’s largest, four people were killed when security forces opened fire on a funeral procession, the Observatory said.

Also, troops conducted a wave of arrests in the Damascus suburb of Dumair, opening fire on a car that then exploded, killing one man and wounding two others, the Observatory said.

In other attacks blamed on rebels, SANA said gunmen kidnapped army Col. Mohammed Eid Saturday in a suburb of the central city of Hama while on his way to work.

It also reported that gunmen stormed the house of local politician Mohammed Ismail al-Ahmad in the northern town of Tin, shot and wounded him, then took him to an unknown location, SANA said. The agency said Ahmad had been planning to run for parliament.

Activists have reported a total of 17 people killed by regime forces since Thursday, while five people were killed in apparent rebel attacks. Those numbers are still much smaller than the norm before the truce.

Arms from Iran to Syria

In Germany, the Der Spiegel weekly said the German government was looking into a report that weapons bound for the Syrian regime had been loaded on a German-owned ship. Der Spiegel said the Atlantic Cruiser was halted in the Mediterranean after its owners were warned it was suspected to be carrying Iranian military equipment to Tartus, Syria.

Der Spiegel quoted shipping agent Torsten Lueddeke of Hamburg-based C.E.G. Bulk Chartering as saying: “We stopped the ship after we received information on the weapons cargo.” He said the ship was chartered to Ukraine-based White Whale Shipping, and that the Ukrainian company said the ship was carrying pumps and similar equipment.

Neither C.E.G. nor the ship’s owner were immediately reachable. The German Economy Ministry said it looks into all suspected embargo breaches but didn’t yet have details of the case.