UAE recalls its envoy in Tehran 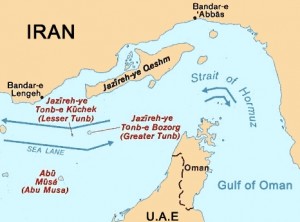 This development comes after the Federal National Council (FNC) strongly denounced the visit of Iranian President Mahmoud Ahmedinejad to the occupied UAE Island of Abu Musa, one of the three UAE Islands occupied by Iran.

The FNC said today in a statement that the ‘visit is a flagrant violation to the UAE sovereignty over its territories, and a setback to all efforts made by the UAE to put an end to the occupation of the UAE three Islands of the Greater and Lesser Tunb  and Abu Musa through direct negotiations or resorting to the International Court of Justice (ICJ),’

It underscored that the visit is contrary to what has been agreed between the two countries to avoid the escalation over the issue to create conducive atmosphere for reaching settlement that consolidates security, stability and good neighbourliness.

The FNC slammed the provocative rhetoric of the Iranian President during his infamous visit to the UAE territory, calling on Iran to cease such provocative steps and adopt peaceful approaches that could build confidence and help reach just settlement to the issue of the occupied three UAE Islands since 1971