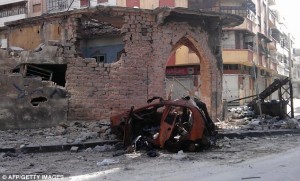 Syria was due to observe a ceasefire from dawn on Thursday, but its fierce attacks on opposition neighbourhoods in the run-up to the U.N. deadline fuelled widespread doubts it would comply.

The Syrian army also showed few signs of withdrawing troops from urban areas, something supposed to have begun on Tuesday under the peace plan agreed with international envoy Kofi Annan.

Activists reported more tanks moving in to a major city even as a pledge to halt operations on Thursday morning was broadcast on state television. The Defence Ministry source quoted by the television giving the pledge on Wednesday also said the army would confront “any assault” by armed groups.

Annan’s spokesman, Ahmad Fawzi, said on Wednesday night an advance planning team negotiating how U.N. observers would monitor the ceasefire had left Damascus after a week of talks.

He had no further comment on any progress reached by the team led by Norwegian Major-General Robert Mood, so it was not clear whether the deployment had been agreed or called off.

“The Defence Ministry announcement is a detour on Annan’s plan which clearly says he should pull back the tanks and end violence. We will wait until tomorrow and see. We will not act before tomorrow,” Qassem Saad al-Deen, Free Syrian Army spokesman inside Syria, told Reuters on Wednesday.

At least 12 people were killed on Wednesday, activists said.

Western powers have scorned Assad’s truce pledges, but so far lack an effective policy to curb the bloodshed, given their own aversion to military intervention and the resistance of Russia and China to any U.N. Security Council action.

Quoting from a letter to Annan from the Syrian foreign ministry, Fawzi said the government had undertaken “to cease all military fighting throughout Syrian territory as of 6 a.m. (0300 GMT) tomorrow, Thursday, 12 April, 2012, while reserving the right to respond proportionately to any attacks carried out by armed terrorist groups against civilians, government forces or public and private property”.

He also stressed that troops should pull back.

Few in the Syrian opposition believe Assad has any intention of complying with Annan’s plan to end 13 months of bloodshed.

“On the eve of the deadline for the full implementation of the ceasefire in Syria, there is no sign on the ground of compliance by the regime,” the main opposition Syrian National Council (SNC) said in a statement.

Syria’s ambassador to the United Nations, Bashar Ja’afari, said in an interview on PBS’ “Charlie Rose” program that his government was “on board” with the peace plan.

But he said government forces would remain on alert to “counterattacks” and that “legally speaking, there is a big difference between declaring a ceasefire and putting an end to the violence.”

Activist videos posted on YouTube showed a shopping mall engulfed in flames after it was hit in bombardment of the Juret al-Shayah district of Homs and bombs crashing into the city’s Khalidiya district. The videos could not be verified and the Syrian government bars most independent media from the country.

“Fighting is still raging as we speak, reflecting what has been an intensification of the violence that the Syrian government has pursued since April 1 when it committed to cease all hostile actions by yesterday,” U.S. Ambassador to the United Nations Susan Rice said in New York on Wednesday afternoon.

“Its commitments, therefore, have little if any credibility given that track record,” she told reporters.

The SNC called for an international ultimatum to Assad if he failed to respect the ceasefire.

“We would like to see a unanimous decision by members of the Security Council that sends an ultimatum to the regime with a deadline that is not too far down the road that says on such and such a date enforcement measures will intervene,” SNC spokeswoman Basma Kodmani said.

U.N. action would need the support of Russia and China, which have blocked previous Security Council draft resolutions on Syria, citing concerns about a Libya-style intervention that would breach Syrian sovereignty.

“We will have another go at trying to persuade the Russians that the situation is deteriorating and the likelihood of regional conflict and civil war is increasing,” U.S. Secretary of State Hillary Clinton said.

China expressed “deep worries” about the violence in Syria and called for all sides to respect a ceasefire.

Turkey, hosting nearly 25,000 Syrian refugees, said Foreign Minister Ahmet Davutoglu would speak with counterparts from the Group of Eight major nations telephone. Across its border with Syria, fighting raged on Wednesday evening, refugees at the border town of Kilis said.

Ankara has urged the Security Council to adopt a resolution that would protect the Syrian people, saying Damascus had not kept its troop withdrawal pledge and had increased the violence.

An activist in the city of Hama said at least 20 armoured vehicles had newly moved into two central neighbourhoods, while an opposition supporter in Rastan, between Hama and Homs, said heavy shelling of the town began after the announcement by the Syrian government that it would respect the ceasefire.

The SOHR said two people were killed in army raids in Deir al-Zor in the Euphrates river valley far to the east. Artillery shelled the Jebel Akrad area in the coastal province of Latakia.

In Deraa, cradle of the revolt against four decades of Assad family rule, activists said troops backed by armoured vehicles had flooded the city and were making house-to-house raids.

Activist Omar al-Hariri said he had never seen so many troops: “The army is exploiting the ceasefire to arrest more dissidents than ever and security forces are burning houses.”

‘PART OF THE SOLUTION’

Annan, at a news conference with Iranian Foreign Minister Ali Akbar Salehi, urged Iran to help resolve the violence and warned of “unimaginable consequences” if it worsened further.

Salehi said Syrians should be able to have free elections contested by political parties, but reiterated Iran’s opposition to any outside interference in Syria’s affairs and made clear the Islamic Republic wanted Assad to stay in charge.

“The opportunity must be given to the Syrian government to make changes, under the leadership of Bashar al-Assad,” he said.

Iran has unstintingly backed Syria, the only Arab nation to support Iran in its 1980-88 war with Iraq and the conduit for Iranian arms to Lebanon’s Shi’ite Muslim Hezbollah movement.

Syria, where Assad’s Shi’ite-rooted Alawite minority dominates a Sunni Muslim majority, has become an arena for a sectarian-tinged regional contest between Shi’ite Iran and Sunni Arab rivals aligned with the West and led by Saudi Arabia.

Top photo:  The Syrian city of   Homs was shelled by the Syrian troops