Lebanese protest against killing of Shaaban 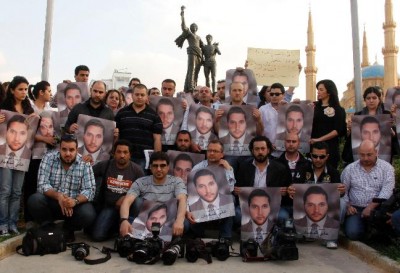 Lebanese activists and journalists take part in a protest, against the killing of Lebanon’s Al-Jadeed television cameraman Ali Shaaban, as they hold his pictures at Martyrs’ square in downtown Beirut, April 10, 2012.

Syrian soldiers shot dead the cameraman on Monday near the border between the two countries, the television channel said. It said Shaaban was on the Lebanese side of the frontier, in the northern Lebanese region of Wadi Khaled, when soldiers opened fire on a car carrying the Al-Jadeed crew. REUTERS/Mohamed Azakir