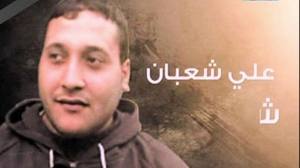 The Lebanese are outraged that Syrian government troops had fired across the border killing Lebanese television cameraman working for Al Jadeed TV who was shot dead on the country’s northern border with Syria.

Ali Shaaban was killed when the channel’s film crew came under fire in the border area of Wadi Khaled.

Lebanese security officials said the gunfire came from the nearby Syrian village of Armouta.

Al Jadeed (New ) TV reporter Hussein Khreis and cameraman Abdul Tabaja were also wounded when Syrian army fired at them as they were filming a report on the Lebanese Syrian borders.

Prime Minister Najib Mikati condemned on Monday the killing by the “Syrian side” . In a statement he said:

“We condemn the act of opening fire from the Syrian side on the Lebanese media team, mainly as this team was operating within Lebanese territory,” said the Mikati, whose government is dominated by Syrian allies, mainly the Iranian and Syrian-backed Shiite Hezbollah party.

-President Michel Suleiman issued a statement condemning the killing of Shaaban and the the wounding of his colleagues , expressing condolences and sympathy and declaring full solidarity with their relatives

The president called the owner of Al Jadeed , Tahseen Khayyat and offered his condolences. He also contacted Justice Minister Chakib Qortbawi, Higher Lebanese Syrian council chief Nasri Khoury and the Lebanese ambassador to Syria Michel Khory and asked them to clarify the circumstances that led to the incident and to follow up on the investigation and called on the Syrian side to investigate the matter to determine the responsibilities and to prevent the recurrence of such attacks in the future.

the government is responsible for the incident

“If you see the car you would think it was in a war zone,” Khreis said on Al Jadeed TV. “It is completely destroyed from the bullets.”

– Former Lebanese president and current Phalange Party leader Amin Gemayel also condemned the killing of Shaaban. In a statement he offered his condolences to the Lebanese media in general and the management al Jadeed TV and the family of the victim in particular stressing the need to for the Lebanese government to exercise more control on the Lebanese-Syrian border in order to prevent the recurrence of such attacks in the future.

– Several March 14 officials called the death of Shaaban an ” Assassination” and held the Lebanese government responsible for the incident .

– Al Jadeed owner Tahseen Khayyat told the station that the Syrian army attack was “deliberate and was not an accident,” adding that “the vast number of bullets that riddled the car confirm that , adding ” we do not need at all an investigation from the Syrian side on this subject ”

Khreis who was wounded by the Syrian gunfire , said ” the team heard heavy gunfire around them from all sides, falling like rain . Shaaban was inside a car when he was struck”. He added”

“If you see the car you would think it was in a war zone,” Khreis said on Al Jadeed TV. “It is completely destroyed from the bullets.”

– Al Jadeed owner Tahseen Khayyat told the station “the vast number of bullets that riddled the car confirm that the Syrian army attack was “deliberate and was not an accident,” adding ” we do not need at all an investigation from the Syrian side on this subject ”

While all the media criticized Syria for the attack, OTV the mouthpiece of Free patriotic Movement leader MP Michel Aoun blamed Shaaban for the incident and said it holds Al Jadeed TV responsible.

Aoun, a close ally of Syria and Hezbollah has been defending the Syrian regime ever since the uprising started 13 months ago in Syria.

One observer told Ya Libnan : What is strange is the fact that Al Manar TV the mouthpiece of Hezbollah called Shaaban a martyr and Hezbollah itself also condemned the attack.