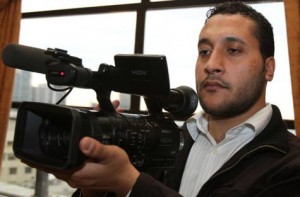 Prime Minister Najib Mikati condemned on Monday the killing by the “Syrian side” on Lebanon’s northern borders of a cameraman working for a Beirut television channel, a statement said.

“We condemn the act of opening fire from the Syrian side on the Lebanese media team, mainly as this team was operating within Lebanese territory,” said the Mikati, whose government is dominated by Syrian allies, mainly the Iranian and Syrian-backed Shiite Hezbollah party.

New TV reporter Hussein Khreis and cameraman Abdul Tabaja were also wounded when Syrian army fired at them as they were filming a report on the Lebanese Syrian borders.

the government is responsible for the incident