Syria not interested in any ideas from Arab countries 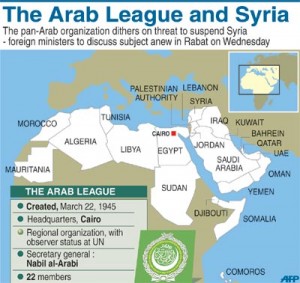 Arab countries, divided over how to stop Syria’s bloodshed, plan to call for the Syrian regime to halt its crackdown on civilians, let in humanitarian groups and free detainees, according to recommendations Wednesday by foreign ministers preparing for a summit this week.

Even before Arab heads of state began their Thursday summit in the Iraqi capital, Syria sharply rejected any measures they take. A Syrian Foreign Ministry spokesman, Jihad Makdessi, said Damascus would “not deal with any initiative” that might come out of the 22-member Arab League.

The rejection reflected Damascus’ refusal to work with the League after the pan-Arab body suspended Syria’s membership as punishment for the bloody crackdown on protesters demanding the ouster of President Bashar Assad. The U.N. says that over the past year more than 9,000 people have been killed in the violence.

Arab countries are divided over how aggressively to intervene in Syria’s turmoil. Gulf nations, particularly Saudi Arabia and Qatar, are believed to want to start providing weapons to Syria’s rebels and even carve out a “safe area” inside the country were the opposition can operate.

Iraq, the host of this week’s summit, is more cautious. Baghdad’s Shiite-dominated government is close to Iran, Assad’s closest ally, and is wary of hurting those ties. On Wednesday, Iraqi Foreign Minister Hoshyar Zebari told Arab foreign ministers gathered in Baghdad that his country rejects foreign intervention in Syria but supports what he called the aspirations of the Syrian people for freedom and democracy.

“We stress our full support to the aspirations and legitimate demands of the Syrian people to freedom and democracy and their right to determine their future, choose their leaders and the peaceful transition for power,” said Zebari, a Kurd.

Assad’s regime on Tuesday announced its acceptance of an initiative by U.N. envoy Kofi Annan calling for a cease-fire. However, violence continued with clashes between government forces and armed rebels. Syria’s opposition is deeply skeptical that Assad will carry out the terms of the peace plan.

Arab foreign ministers on Wednesday were working out recommendations for the heads of state to approve when they meet here Thursday. According to draft recommendations obtained by The Associated Press, the summit would call on Assad to implement a cease-fire, let in humanitarian aid and release all those detained the past year. It also demands he allow peaceful protests, withdraw army troops from urban centers and implement previous Arab League proposals to end the conflict.

Speaking before Zebari, Libya’s foreign minister, Ashour Ben Khayil, was much more emphatic about the conflict in Syria, speaking about “the tragedy of our brothers in Syria who are facing a tyrannical regime while the world looks on without doing anything.”

Opposition members accuse Assad of agreeing to Annan’s plan to stall for time as his troops make a renewed push to kill off bastions of dissent.

“We are not sure if it’s political maneuvering or a sincere act,” said Louay Safi, a member of the opposition Syrian National Council. “We have no trust in the current regime. … We have to see that they have stopped killing civilians.”

Annan’s plan calls on Damascus to immediately stop troop movements and use of heavy weapons in populated areas and to commit to a daily two-hour halt in fighting to allow humanitarian access and medical evacuations.

Gulf Arab nations, particularly Saudi Arabia and Qatar, have been pushing behind the scenes for more assertive action to end the Syria conflict. Privately, they see little benefit in the Arab League’s efforts to reach a peaceful settlement and prefer instead to see a small core of nations pooling together to act on their own.

Among the options they are considering are arming the Syrian rebels and creating a safe haven for the opposition alongside the Turkish-Syrian border to serve as a humanitarian sphere or staging ground for anti-regime forces.

The Sunni-led Gulf countries are hoping that by forcing Assad’s fall they can pull Sunni-majority Syria out of its alliance with Iran and break the belt of Tehran’s influence that stretches through Iraq and Syria to the Mediterranean.

A Sunni-ruled Syria would give the U.S.-allied Gulf Arabs a significant victory in their long-running power struggle with non-Arab, mainly Shiite Iran. But that prospect worries Iraq, with its sectarian divides between a Shiite majority that now holds power and a Sunni minority that resents its sidelining.

Shiite-ruled Iraq is hosting the summit to show that it has emerged from years of turmoil and American occupation. But a massive security operation in Baghdad mirrors fears that Sunni militants could try and disrupt the meetings.

Central Baghdad was virtually deserted on Wednesday, with hundreds of heavily armed troops and policemen deployed in full combat gear. The summit venue is a palace once used by Iraqi dictator Saddam Hussein and is located inside the “Green Zone,” a highly secure area on the west bank of the Tigris River where the Iraqi prime minister’s office and the U.S. and the British embassies are also located.