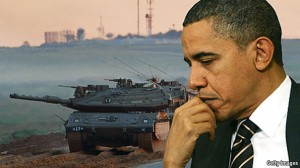 Seeking to stem the violence in Syria, the U.S. and other key allies are considering providing Syrian rebels with communications help, medical aid and other “non-lethal” assistance.

Turkey has been a key U.S. partner in international efforts to quell violence in neighboring Syria and push President Bashar Assad to leave power. The United Nations estimates 8,000 people — many civilian protesters — have been killed in year-long clashes between forces loyal to Assad and opposition fighters.

“It’s important to the opposition as they’re formulating their vision of an inclusive and democratic Syria to have the ability to communicate,” Rhodes told reporters traveling with Obama.

The U.S. has been loath to intervene militarily in Syria or provide the rebels with weapons, saying that would only serve to further militarize an already violent situation.

The Obama administration and its allies have been seeking ways to provide humanitarian assistance in Syria. Rhodes said the prospect of providing the rebels with non-lethal assistance would be a central focus of the April 1 meeting of the diplomatic group “Friends of Syria.” Turkey is hosting the upcoming meeting and the U.S. will be represented by Secretary of State Hillary Clinton.The U.N. refugee agency estimates 230,000 Syrians have fled their homes since the uprising against Assad’s regime began last year. About 16,000 refugees live in refugee camps in Turkey.

”’We cannot remain a spectator to these developments,” Erdogan said following his meeting with Obama.The U.S., Europe and many Arab states have called on Assad to stand down, but Russia and China have protected Syria from condemnation by the U.N. Security Council.Earlier this week, the council passed a nonbinding statement calling for a cease-fire to allow for dialogue between all sides on a political solution and the delivery of aid to suffering civilians.

While Obama has repeatedly said that the demise of Assad’s regime is inevitable, there are few signs that he plans to step down any time soon.The U.S. and European allies have sought to ratchet up economic pressure on Assad’s regime with a series of sanctions, including fresh European Union penalties on Assad’s British-born wife.