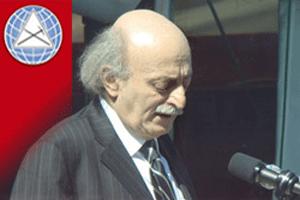 The Al-Qaeda affiliated Abdallah Azzam Brigades on Saturday issued a statement that Syria “offered to release some of our Jihadist leaders imprisoned in the jails of the Syrian regime in exchange for assassinating Progressive Socialist Party leader MP Walid Jumblatt.” No further details were offered.

Abdallah Azzam Brigades also attacked Prime Minister Najib Mikati, saying he was “an enemy to the Sunnis who formed a government without [the consent] of the Sunni majority.”

The Brigades were named in honor of Abdallah Azzam, the late advisor to deceased Al-Qaeda chief Osama Bin Laden.

Abu Mohammed is the head of the Abdullah Azzam Brigades, who is accused of planning attacks against the Lebanese army.

He resides in the Ain el-Hilweh Palestinian refugee camp near the southern city of Sidon but his whereabouts are unknown.

The group denied any involvement with the terrorist cell reportedly discovered by the Lebanese army and which was seeking to carry out operations in North Lebanon and Palestinian camps.

The army detained a group that consists of six people, who are affiliated with the Abdullah Azzam Brigades – al-Qaida network, as the army is seeking to arrest the head of the network.

Meanwhile, March 14 MP Marwan Hamadeh on Sunday requested clarifications regarding Abdallah Azzam Brigades’ claim that it had been offered a deal to assassinate Jumblatt.

“What happened to the investigation [into the terrorist cell discovered by the Lebanese army]?” Hamadeh asked during an interview with MTV television.

Hamadeh also questioned whether there will be a new wave of political assassinations in Lebanon.

Last week, Mikati confirmed media reports that the army had discovered a terrorist radical group, two members of whom were soldiers in the army.

The premier said the Lebanese army discovered a “terrorist group which intended to carry out destructive operations in North Lebanon and in the Palestinian camps, but which do not have anything to do with the events in Syria,” according to the National News Agency.