While massacring 200 Syrians in Homs, Assad's wife shopped for $7,000 shoes 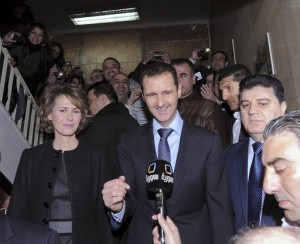 A cache of e-mails leaked to CNN is giving extraordinary insight into the life of Syria’s first family during the regime’s move to crush a now-year-long civilian uprising.

On February 3 — the same day opposition activists reported more than 200 killed in the “Homs massacre,” and a day before the U.N. Security Council was scheduled to meet on Syria — the first lady apparently e-mails a friend asking whether she should reserve Christian Louboutin shoes costing as much as $7,000 a pair.

“These are really iconic pieces for Spring and some fabulous styles,” the e-mail says.

Two days later, mortars and rockets rained down on Homs after the Security Council failed to pass a resolution aimed at stemming the violence. That same day, President al-Assad apparently e-mailed his wife the lyrics and audio file to a song by U.S. country singer Blake Shelton with the words, “God gave me you for the ups and downs/God gave me you for the days of doubt.”

Just before Bashar al-Assad delivered a speech January 10, an aide apparently e-mailed him, saying a political adviser to the Iranian ambassador was encouraging al-Assad to use “strong and violent” language.

In that speech, al-Assad then promised to strike the opposition with an “iron fist.”

After misleading monitors in Syria: “Hahahahahahaha, OMG!!! This is amazing!”

There are also e-mails from a man named Hosein Mortada, who — according to his Facebook page — is the Damascus bureau chief for two Iranian news networks. Mortada twice offers advice to the president’s aide, who passes it on to al-Assad.

On Christmas Eve, Mortada apparently wrote to an al-Assad aide that al Qaeda should not be blamed for a recent attack.

“I even received calls from Iran and Hezbollah, being the director of several Iranian and Lebanese channels, and they advised me NOT to even mention al Qaeda being behind the incident … because this would be a serious tactical media error,” Mortada wrote, according to the e-mail.

December 24 was the day Syrian troops began their onslaught on the Baba Amr neighborhood in Homs, according to activists. The next day, an apparent e-mail from Mortada said his “friends” in the city reported armed people in front of every door were threatening residents and forcing them to protest.

The next day, with Arab League monitors on the ground in Syria, Mortada apparently e-mailed the same aide that Syrian supporters needed to make sure opposition members did not turn out in large numbers in public.

“We need to take control of public squares during this period,” he wrote. “At the same time, groups affiliated with us will fill the squares … so we don’t leave them open for others, since the opposition is getting ready to move with the presence of the monitors. In this case, we will block their way and (prevent them) from reaching any square.”

The monitors stayed in Syria for several weeks, visiting various cities and towns as they tried to assess whether the government was upholding its commitment to end the crackdown.

Shortly after the monitors’ arrival in late December, an apparently amused al-Assad sent one of his closest advisers a YouTube video that mocked a theory the regime had hidden tanks during the monitors’ visit.

“Check out this video on YouTube,” al-Assad wrote on December 29, according to the e-mail. The reply in English: “Hahahahahahaha, OMG!!! This is amazing!”

Some of the most interesting insights in the al-Assad e-mails are personal.

In November, as the Syrian military ramped up its attack on Homs, first lady Asma al-Assad seemed more concerned with the latest “Harry Potter” DVD, apparently asking a friend to bring the movie when she comes for a visit.

The first lady in the past year also seems to have spent much of her time online shopping for expensive jewelry, art, and furniture, and e-mailing boutiques in London and Paris.

In one e-mail exchange with an art dealer in London, Asma al-Assad, apparently using a false name, inquires about six artworks that all feature butterflies. The dealer responds that the works cost between £5,000 and £10,500 ($7,800 and $16,500).

The art inquiry was sent October 28, the same day Syrian protesters staged a massive demonstration in the city of Hama, in which they called for an end to al-Assad’s rule.

“Threaten Israel and show our power as a country”

One of al-Assad’s advisers apparently sent an e-mail containing a picture of a woman wearing only a G-string and a bra.

Other e-mails contain suggestions for al-Assad’s speeches and indicate further influence by Iran.

Al-Assad should use “emotional” language about pro-Syrian “martyrs,” wrote a female aide named Hadeel, who said she consulted with a number of people, including a political adviser to the Iranian ambassador.

In a December 1 e-mail, Hadeel urged al-Assad to use tough language in his speeches.

“Threaten Israel and show our power as a country and a people in case our security is threatened (standing in the face of anyone who wants evil for Syria — pointing … at our real enemy),” she writes.

Prior to Barbara Walters interview: “Americans are too stupid to understand details.”

“Just like you said in your first speech, if a war is imposed on us, we welcome it.”

She said al-Assad looked good in a military uniform during a speech and signed off by saying, “I am going to the movies.”

One e-mail claims to have duped CNN into reporting the words of a fake pro-Syrian commentator. The woman says she created a fake username on Facebook and wrote a commentary that she said later appeared on the air.

An e-mail sent by the president to himself contains talking points for an interview he gave to Barbara Walters on the U.S. TV network ABC in early December. He sent the e-mail Jan. 17; there is no information on who sent the original message or why he re-sent it weeks later.

Al-Assad was to briefly mention government reforms, the e-mail said, but not go into detail because “Americans are too stupid to understand details.”

“It would be worth mentioning how ur personality has been attacked and praised in the last decade according to the media,” goes the e-mail, written in English. “At one point u were viewed as a hero and in other times u were the ‘bad guy.’ Americans love these kinds of things and get convinced by it.”

Whoever wrote the e-mail ended by saying, “Thank you. U are amazing!”

More fawning from his al-Assad’s inner circle came in another e-mail, with the sender writing in English, “I never met an amazing person like u… i get so proud when people meet u and go tell the world how amazing ur. Miss u.”

Amid the violence, it appears not even close friends could persuade al-Assad to step down.

“It seems like its getting worse rather than better — is that the case, or is it the media? What is the long-term plan?” wrote the daughter of Qatar’s emir to the first lady, according to an e-mail from August. “It seems like there needs to be an exit strategy.”

She made a similar suggestion later that month.

“From what I see there’s so many innocent lives being lost. There’s still an opportunity for transfer of power, transition without risking a lot,” she wrote, according to the e-mail. “It’s a natural time to address the nation with the intention of stepping down. The lives lost cannot be retrieved, but there’s still a chance to keep a positive image.”