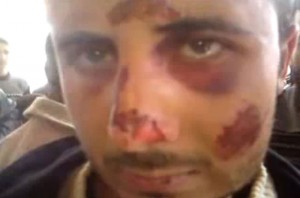 A video aired by a British television station purporting to show Syrian patients being tortured in hospital appears to support increasingly grave allegations pointing to crimes against humanity, the U.N. torture investigator said on Tuesday.

Juan Mendez, United Nations special rapporteur on torture worldwide, said that while he had not seen the Channel 4 video, it seemed in line with recent reports he has received on Syrian forces torturing opponents.

“Unfortunately this new allegation is consistent with what my mandate (office) has been receiving over the last several months. The new allegation only adds to the gravity of the situation,” Mendez told Reuters in Geneva.

The secretly shot video, which Channel 4 aired on Monday, showed what it said were Syrian patients being tortured by medical staff at a state-run hospital in Homs.

Wounded, blindfolded men were chained to beds. A rubber whip and electrical cable lay on a table in one of the wards. Some patients showed signs of having been severely beaten.

Channel 4 said it could not independently verify the video.

Syrian President Bashar al-Assad faced growing Western anger on Tuesday for preventing aid from entering a devastated district of Homs and over accusations of human rights abuses, including pictures said to show torture victims at a hospital in the city.

Mendez, a U.S.-based law professor from Argentina who himself suffered torture while jailed by the military dictatorship in the 1970s, took up the independent U.N. post in Oct. 2010 and reports to the U.N. Human Rights Council.

He noted that already last year he had denounced Syria’s use of excessive force against demonstrators, “people being beaten so badly in the streets that it amounted to cruel treatment and in some cases torture”.

Mendez said that since then he has received further credible allegations of inmates being tortured in detention centres.

“But all of it seems to be increasing in gravity,” he said.

Call for ICC to Investigate

“With respect of torture, as grave as the allegations were six to eight months ago, this latest seems a step or two above that. I endorse the call by the High Commissioner to have the International Criminal Court investigate whether these amount to crimes against humanity,” he said.

“I think that the Security Council has a responsibility to protect the Syrian people from these very serious crimes. One way to do it would be for the ICC to exercise jurisdiction,” said Mendez.

Asked about chances of the Security Council taking up the issue, given vetoes by China and Russia of Western-backed resolutions condemning Assad over a crackdown and supporting a call for his exit from to power, he said:

“Judging by the vote in the Security Council last time around I don’t have very high hopes. But I do think we owe it to the Syrian people to ask all five permanent members to exercise their responsibility to protect the Syrian people’s right to be free of torture and crimes against humanity,” he said.

“It may even be the same footage which was sent to the commission of inquiry on Syria,” he told a news briefing.

“The pictures are truly shocking.”

This had been used in their Feb. 23 report that accused Syrian forces of committing crimes against humanity, including torture.

The first report by the U.N. commission of inquiry last November documented cases of injured people taken to military hospitals where they were beaten and tortured in interrogations.

“Torture and killings reportedly took place in the Homs military hospital — which is the one shown in the Channel 4 footage — by security forces dressed as doctors and allegedly acting with the complicity of medical personnel,” Colville said.

The U.N. inquiry documented evidence that sections of Homs military hospital and Latakia state hospital were “transformed into torture centres actually within the hospitals”, he said.