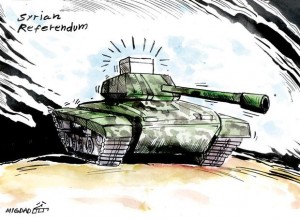 In the souks and squares of mostly Shi’ite Muslim southern Lebanon anger simmers over Western and Arab pressure to oust Syrian President Bashar al-Assad, seen by most as a bulwark against feared neighbour Israel.

Many see double standards in the bullish calls by autocracies Saudi Arabia and Qatar for Assad’s demise over his crackdown on pro-democracy protests, and also suspect the West’s motives for his ousting are simply to bolster U.S. ally Israel.

“Why is it that demonstrations are not allowed in Saudi Arabia but must be supported in Syria? Where’s their democracy?” said builder Abu Mustapha, 49, speaking under the vaulted arches of the southern city of Sidon’s winding medieval market.

Saudi Arabia brooks no dissent at home and along with Qatar and other Sunni-ruled Gulf states sent troops to crush pro-democracy protests by Shi’ites in Bahrain last year.

They have even suggested arming Assad’s opponents, raising the spectre of a civil war fought by proxies for sectarian interests that could drag in neighbouring Lebanon’s powerful Shi’ite militant group Hezbollah and its backer Iran.

Talk of conspiracy fills the pungent air of the narrow lanes and bustling alleys of souks in Sidon and the city of Tyre further south, as scepticism mounts over Arab and Western moves to end the Assad family’s four decades of absolute rule.

Memories of Israeli occupation and attacks are still raw for many in the south, and most are loath to criticise Assad because of his backing of Hezbollah, lauded by many Arabs for confronting Israel during its 2006 war on Lebanon.

Hezbollah receives arms and other support from Shi’ite Iran through Syria, which is dominated by adherents of the Assad clan’s Alawite brand of Shi’ite Islam.

“The people responsible for these deaths in Syria are those taking money from Europe, the mercenaries, sent to bring down the regime,” he added, speaking in a busy market, from where it is a short walk to the shore and a view of the Jewish state.

Some label footage of Assad’s army firing on protesters or images of dead civilians as media trickery, while those who believe the news are wary of outsiders exploiting Syria’s turmoil and instead want a domestic solution.

“The pictures are fake and exaggerated. The only solution is for the Arabs to stop meddling. This is a Qatari plot supported by Israel,” said Zain Faqhi, 53, a Tyre jewellery shop owner.

Sidon health worker Adnan Batrouni, 35, said he condemned the killings in Syria, but did not want the kind of Western intervention that helped topple Libya’s Muammar Gaddafi.

“I’m against what’s happening to the people. It’s savage. The two sides need to talk, there needs to be a political solution. The U.S. and Europe have their own agenda,” he said.

Assad’s demise would hinder or eliminate Hezbollah’s arms supply, removing a thorn in Israel’s side and reducing non-Arab Iran’s influence in the Levant, to the benefit of diplomatically ambitious Qatar and Tehran’s Sunni Arab arch-rival Saudi Arabia.

For some, self interest outweighs concern over the thousands killed in Assad’s savage year-long crackdown on protesters.

“Maybe Assad did kill some innocent people. I don’t know for sure. But we have this monster Israel behind us over here. How are we supposed to defend ourselves without Syria?” said Tyre market labourer Amin, 60.

Lebanon is one of few Arab states that has not turned on Assad, who still enjoys support from Russia, China and Iran.

Assad’s current term as president ends in 2014, and to placate critics last week he held a vote on constitutional reform and has promised parliamentary polls within three months.

But the moves, conducted while his forces shelled desperate civilians and rebels in the besieged city of Homs, were dismissed by Assad’s critics as a sham. Few in the West believe his clan will loosen its grip after decades of iron rule.

His supporters in Lebanon, however, see things differently.

“Syrians have waited 42 years for reform. Why not wait two more years and elect someone else, rather than waste thousands of lives? If the elections have international observers, maybe they will be fair,” said Sidon photo shop owner Arif Tarha, 61.

Not everyone in the Hezbollah-dominated south supports Assad and some are wary of speaking openly, waving journalists away.

Eyes follow reporters through the crowded souks, where meat dangles from hooks next to glittering jewellery stores, and where fishmongers descale tuna as men sit in dark corners with hookah pipes and send fragrant smoke curling into the gloom.

A Palestinian fruit seller who gave his name as Hilal whispered: “Of course Assad’s a criminal. He kills women, children. He’s worse than the Israelis. He’ll soon be gone, just like Gaddafi.”