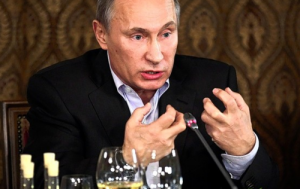 Security services in Russia and Ukraine said Monday they had foiled a plot to kill Prime Minister Vladimir Putin, but his opponents ridiculed the announcement as a campaign stunt six days before he runs in Russia’s presidential election.

“Our final goal was to go to Moscow and attempt to assassinate Putin,” a bruised man described as one of the plotters was shown

saying in a police interview transmitted on Channel One. “Our deadline was after the election of the president of Russia.”

Opinion polls show Putin will win the election and reclaim the post he held from 2000 to 2008. But he faces a growing opposition protest movement and wants to secure outright victory Sunday, averting a runoff that might dent his authority.

A spokeswoman for Ukraine’s security agency SBU said a man was detained in the Black Sea port of Odessa on January 4 after an explosion at an apartment that killed an accomplice. Another suspect, on the international wanted list, fled.

“We found him in an apartment and detained him without a single shot being fired on February 4,” SBU spokeswoman Marina Ostapenko said.

“I can officially confirm that they were preparing an (assassination) attempt on Putin.”

Viktoria Bogomolova, a spokeswoman for the FSO, an agency in charge of guarding Russian officials, confirmed the agency had worked with the SBU to identify the alleged attackers.

Channel One said one of the alleged would-be assassins, who had previously lived in London, had shown them a secret store of explosives close to one of Moscow’s main roads used by Putin to go to his government residence.

The channel attributed the plot to a group known as the Caucasus Emirate, led by Chechen warlord Doku Umarov, which has carried out attacks including a suicide bombing at Russia’s busiest airport last year which killed 37 people.

The FSO spokeswoman said it would be premature to discuss taking any additional security measures following the incident.

Separatists in North Caucasus have said they target Putin, Russia’s dominant leader for the past 12 years and the man they hold responsible for a military crackdown on their movement.

Putin, a former KGB officer who has forged a tough guy image with stunts such as shooting a tiger and riding a horse barechested, is often accompanied by hundreds of armed bodyguards when he travels.

Traffic is halted when he goes to and from work in Moscow in a long motorcade with flashing blue lights. Several assassination attempts have been reported over the years.

The Russian opposition, which has staged the biggest political protests since Putin came to power, reacted with skepticism, suggesting that the timing of the announcement was intended to attract sympathy for Putin before Sunday’s election and underlined his weakness.

“Without a doubt there is always information about preparations or attempted terrorist attacks. But what does it really mean that (news of) this assassination attempt appears today?” said opposition parliamentarian Gennady Gudkov.

“The timing was certainly political,” he told reporters.

Another opposition leader, Vladimir Ryzhkov, said that “assassination attempts are the favorite tactic of dictators.”

Putin’s spokesman Dmitry Peskov dismissed such allegations as “inappropriate” given the “real threats for Putin’s security.” Monday Putin, 59, chaired a meeting on arms trade in his residence outside Moscow.

Allegations of widespread fraud in a parliamentary election on December 4 have angered many liberals and nationalists in Moscow and St Petersburg, and some Russians are alarmed that he could rule Russia for another 12 years if he wins two more terms.

Previous reports of assassination attempts have rarely made a big impact in Russia. The FSO spokeswoman said such attempts had taken place but declined to specify.

In one of the incidents, a sniper was widely reported to have been preparing to shoot at Putin and his ally, President Dmitry Medvedev, as they walked outside the Kremlin after Medvedev’s victory in the 2008 presidential election.

Putin has remained the more powerful of the two, despite stepping aside to become premier in 2008 because of constitutional limits.

Russia has a long history of assassinations. Tsar Alexander II was killed by a bomb in 1881 and Prime Minister Pyotr Stolypin was shot in a theater in 1911.

A plot to kill Soviet dictator Josef Stalin along with the British and U.S. leaders was foiled in 1943, Soviet leader Leonid Brezhnev was shot at in 1969, and Soviet state founder Vladimir Lenin survived several attempts to kill him. An attempt on President Boris Yeltsin’s life was reported in 1993.

But no acting Soviet head of party, state or government was assassinated, and no Russian president or prime minister has been assassinated since the Soviet Union collapsed in 1991.