Gemayel reject the link between security in Lebanon and Syria

” Claims that Lebanon’s security is linked to Syria’s “need to be rectified because it is unacceptable that absence of security in Syria would imply [the same thing in Lebanon].” Gemayel said following a meeting at Dar al-Fatwa with the mufti of Tripoli and the north, Sheikh Malek Shaar.

He stressed that the Lebanese should show unity in order to stop the Syrian conflict from affecting Lebanon’s stability.

Commenting on the crisis in Syria, Gemayel said: “We cannot but sympathize and stand in solidarity with the Syrian people, who are calling for freedom and democracy.” 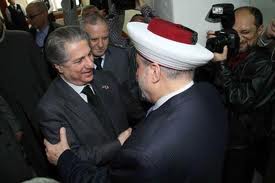 “[The alliance] preserves the higher Lebanese interests and [the country’s] sovereignty and democratic system,” the Phalange party leader was quoted as saying.

Gemayel also delivered a message to residents of Tripoli in North Lebanon calling on them to join efforts in support of “Lebanon and the Lebanese state in order to get rid of all statelets and security, political and social islands.”